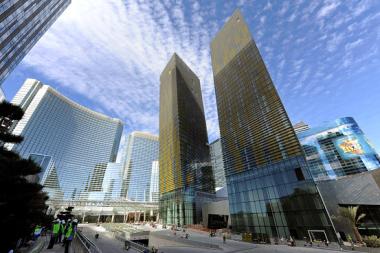 LAS VEGAS, NV - The Las Vegas luxury high rise condo market continues to attract investors with strong sales and price increases that started in 2013 and have continued into 2014.

"Las Vegas was hit so hard, that even with price increases and steady sales, the current prices are 50-70% off the pricing levels we saw in 2009." Says Jason Trindade, CEO and Broker for KingofCondos.net in Las Vegas.

"It seemed like the more time that went by, the worse the market got. Both the Cosmopolitan and Vdara were complete failures with a handful of closings before shutting down the sale operations all together. They operate as hotels now." Says Mike Bell, President of Sales for KingofCondos.net and former sales manager for both City Center and the Martin.

During a recent survey of Las Vegas luxury condo sales offices, we confirmed that sales in 2013 were strong with 2014 off to a good start during a seasonally slow portion of the year.

In 2013, Trump Hotel and Spa closed 65 sales with 4 closed in 2014 and 6 contracts pending. Increased room rates that create a positive cash flow have made these condo hotels an attractive investment. They have approximately 450 units left with studios starting at $250,000 and 1 bedrooms from $515,000. Turnberry Towers closed 52 units in 2013 and they have approximately 175 units left to sell. Starting prices for 1 bedrooms are $249K and 2 bedroom start at $379K. With the SLS resort opening across the street in fall, there is a lot of value in these low priced luxury condos on the North end of the Strip. The Martin, which is a 5 minute walk to City Center, has been an extremely hot property over the past year with 88 closings in 2013 and 10 closings so far in 2014. Prices start in the high $300Ks and they expect to sell out by the end of the year. With restrictions on short term rentals, the Martin has become a popular choice for 2nd home buyers who want the exclusiveness of a private residence in a vacation destination. Veer Towers at City Center is right in the middle of the action where the developer sold out last year with 427 units going to a reseller, Ladder Capital of New York, at a huge discount. Ladder Capital resold 128 units in 2103 and 32 in 2104, which is more then any developer in Las Vegas. They have 290 units remaining with prices still over 50% off the original developer pricing set by City Center Residential.