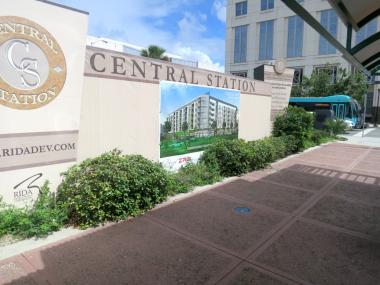 "Central Station makes it easy to have it all by offering unmatched access to SunRail and all that downtown Orlando has to offer," said Jay Curran, vice president of Crescent's multifamily group. "It is a perfect fit for Crescent's model of creating balanced lifestyle experiences for people, and we are excited to be part of such a transformative project in downtown Orlando."

The first residential development to be built immediately adjacent to a SunRail commuter train station, Crescent Central Station will encompass more than two acres of land at the corner of Amelia Street and Orange Avenue in Orlando's central business district.  Crescent's plans include 12,000 square feet of retail space on the ground floor; the retail will be owned and managed by the RIDA Development team, whose vision for the multi-phase master plan also includes office space, a hotel and additional ground-level retail.

Crescent Central Station, designed to blend seamlessly into the fabric of its high-density, urban location, will be complemented by sophisticated architecture and thoughtfully planned public spaces providing pedestrian connectivity to the SunRail station.

Crescent's six-story building will include studios and one-, two- and three-bedroom units as well as unique, brownstone-style homes on the ground floor. Units will include upgrades such as granite countertops, stainless steel appliances, upmarket lighting and USB ports for connectivity. The community will feature an upscale amenity package including a two-story fitness center offering individual and group fitness on demand as well as concierge personal trainers. Residents can relax at a well-appointed, resort-style pool or enjoy an expansive rooftop terrace complete with outdoor grilling and dining space, a sundeck and an outdoor movie projector screen as well as views of the Orlando skyline.

Crescent Central Station will offer unparalleled access to the SunRail line and an address within easy walking distance of downtown Orlando's vibrant social scene and top employers. Occupants will enjoy having some of the city's most beautiful public spaces in their own backyard with the construction of a new public park on the west side of the property. The park will include Gertrude's Walk, a bike/walk trail with a rich history that is part of the larger Orlando Urban Trail. Central Station will include convenient bike storage as well as downtown Orlando's only off-leash, public dog park.

"Downtown Orlando is already an incredible place to live," Curran said. "Residents at Central Station will be able to hop on the SunRail line for easy access to employment centers such as Orlando Health and Florida Regional, catch LYMMO service throughout downtown and access adjacent bike lanes for a recreational ride around Lake Eola or Gertrude's Walk for a stroll down to Church Street. Central Station is an exceptional hub for life in this vibrant city."

The project is financed by an equity investment from Crescent Communities and construction financing by Synovus Bank and Nationwide. Winter Park Construction is the general contractor. Lord Aeck Sargent is the project architect, GAI is the civil engineer and Dix.Hite+Partners is the landscape architect. ZRS is the property manager, and Vignette Interior Design is the interior designer.

Crescent Central Station is part of Crescent Communities' growing presence in Orlando and central Florida. The multifamily group recently opened Crescent Crosstown in Tampa, and Crescent Bayshore is on track to open there this spring. In January, Crescent's residential group announced the launch of a new phase and the completion of existing home sites in Oakland Park outside Orlando. The company's commercial group also has a strong presence in Orlando, and its operations are based in the City, which benefits from above average job growth, a booming health sciences complex and affordable living.