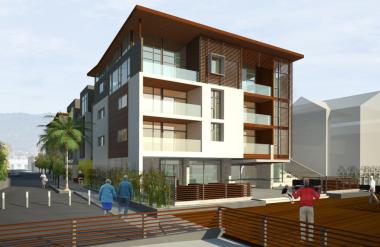 The groundbreaking celebration took place on Jan. 9 at the future site of Phoenix Commons, a cooperative lifestyle community for senior living that uses cohousing principals to create a sustainable, active lifestyle for older adults.

“Phoenix Commons is an innovative, collaborative and environmentally sustainable senior community where, together, residents will have control over their own futures,” said Lauren Zimmerman-Cook, chief financial officer of Elder Village Development, which is spearheading the project. “This is more than just a building – it truly is a community where people can come together to create the kind of lives in retirement that they’ve always dreamed of.”

Phoenix Commons will be located at 340 29th Ave., on the waterfront of the Oakland/Alameda Estuary in the eclectic Jingletown neighborhood. The building will contain 7,000 square feet of communal living space and will feature large glass doors that lead to the waterfront patio and adjacent boardwalk that runs along the waterfront.

Additional community spaces are available that can be used for a spa or therapy and fitness activities. Depending on the resident community’s interests and needs, more spaces can be adapted for such uses as an art studio, workshop, library, theater/media room, conference room or playroom for grandchildren. The property has an emphasis on using eco-friendly technology and green design, such as solar panels, recycling water and vegetation screens to help regulate indoor temperature, and incorporates the principle of universal design for ideal accessibility.

Alongside Zimmerman-Cook, Oakland Mayor Jean Quan, Oakland City Councilmember Noel Gallo, Alameda Elder Communities CEO Christian Zimmerman and project architect Jeff Zimmerman gathered together during the event with future residents, cohousing advocates and supporters to celebrate the start of the project’s construction phase, which is expected to be complete in early 2015.

Councilmember Gallo praised the project as being an important part of what is fast becoming one of the most attractive areas of Oakland and said he was excited to welcome the new residents to his district. Mayor Quan lauded the project’s role in helping to re-energize Oakland’s waterfront areas and bringing critically important senior housing opportunities to the city.

Cohousing communities, like Phoenix Commons, are a type of collaborative housing in which residents actively participate in the design and operation of the community. The physical design of Phoenix Commons is intended to encourage both social connection and individual space. Private homes contain all the features of conventional homes, but residents also have access to extensive common facilities. The cost of some meals, transportation, future care, community maintenance and other administrative and operational duties are shared among community members. Unlike traditional senior living communities, cohousing residents decide together the amenities and services they want and need.