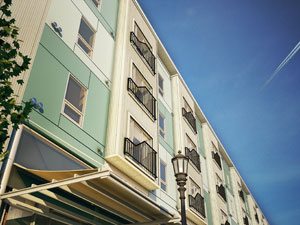 VIRGINIA BEACH, VA - Armada Hoffler Properties, Inc. announced that it has closed on a previously announced acquisition of Liberty Apartments, also referred to as the Apprentice School Apartments, in Newport News, Virginia, for approximately $30.7 million.

Liberty Apartments is located next to the Newport News Apprentice School of Shipbuilding and features 197 apartment units and approximately 28,000 square feet of retail space. Armada Hoffler acquired Liberty Apartments for approximately $30.7 million of total consideration, including the issuance of approximately 695,000 Operating Partnership units ─ the value of which was based on the Thursday, January 16, 2014 closing stock price of AHH, the repayment of a $3.0 million mezzanine loan and the assumption of approximately $20.9 million of debt that bears interest at 5.66% and matures in 2042.

On May 1, 2013, the Company entered into a contribution agreement to acquire Liberty Apartments from affiliates of Armada Hoffler. Pursuant to the contribution agreement, the Company acquired Liberty Apartments upon the satisfaction of certain conditions, including the completion of construction of all three components of the Apprentice School Project. While construction of the project was completed on schedule in November 2013, timing of the sale was adjusted to more closely match the opening of the Apprentice School.