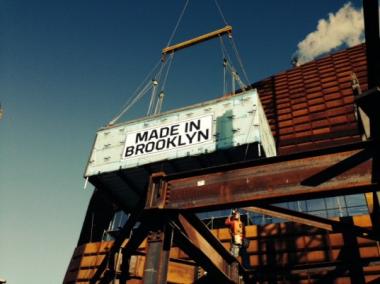 BROOKLYN, NY - Last week, the first modules were set at the B2 residential tower at Atlantic Yards in Brooklyn, New York. When complete, at 32 stories, it is expected to be the tallest modular building in the world.

The Modular Building Institute (MBI), the international trade association for commercial modular construction, applauds this venture for the way it is helping to break new ground for the building industry. Though modular construction has been around for more than half a century -- and used in everything from homes to schools to health care, hotels and retail – B2 marks the first time that a modular building will ascend this high. Currently the world’s tallest modular building is believed to be a 25-story student dorm in the U.K.

Amy Marks, President of XSite, said that this project is indicative of the recent growth in enthusiasm for modular construction. “In the last five years, there has been a convergence toward off-site because of many factors, including building information modeling (BIM), acceptance from some major industry players and the larger construction firms, as well as the availability of off-site consultants and builders to guide and enable conventional designers and builders to incorporate and optimize prefabricated components and modules into their build programs,” she said.

“We are very excited about the prospect of a 32-story modular building. This project proves what savvy investors, developers and contractors already know – that modular construction is safer and more resource efficient, and reduces the construction schedule without sacrificing quality or durability. In short, it’s greener, faster and smarter.

“With more than 10 million square feet of multi-story permanent modular construction projects delivered over the past several years for various federal agencies, as well as the education, multifamily housing, retail and commercial sectors, this tried and tested method is ready for prime time,” Hardiman said.