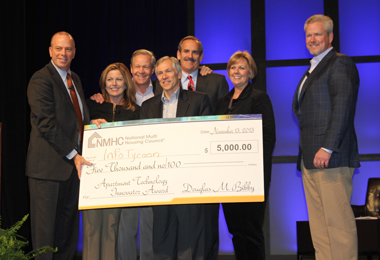 DALLAS, TX – The National Multi Housing Council ended its highly successful flagship OpTech Conference with its own spin on a version of ABC’s Shark Tank. For the second year in a row, a select group of startups in the multifamily industry came to pitch their technology ideas. In addition to pitching to the live audience they were standing before, NMHC assembled an elite panel of multifamily industry leaders to make the final decision to crown the winner.

But before these technology entrepreneurs faced the judging panel and a standing room only live audience, they had to make it through the process. The promising startups had to have an innovative new technology product or service that would benefit the apartment industry in some way, have been in business for less than five years, and be prepared to give a live presentation detailing their idea before the panel of judges.

NMHC President Doug Bibby stated, “we did not know what the response was going to be, we had a very narrow line to follow to make sure we had real startup companies that had solutions geared specifically to our industry. Much to our surprise with just pure Internet based marketing through our sponsor MultifamilyBiz.com, we were overwhelmed with applicants eager for a chance to give their pitch.”

This year, a new twist was added to the voting, allowing the audience to vote live for a “People’s Choice Award.” The vote took place electronically and would not be revealed until after the panel of judges crowned the official winner of the NMHC LaunchPad Startup Competition.

With the entries for the NMHC LaunchPad Startup Competition stacked high, NMHC quickly assembled a panel to weed through the applicants to find a unique diverse group of startups to make the final cut. The “Final Four” selected to give their pitch were the following:

Benchmarx Utility Monitoring: A web based On Demand Utility/Energy Management application using hyper intuitive visualization and alerting automation. Benchmarx allows users to “See the Unseen” utility waste and inefficiencies at a single Community or an entire Portfolio - exactly where it's occurring - and makes this information readily available and useful to Asset and Property Managers.

Runs Like Butter: Provides ButterflyMX, the first smart phone video intercom for the multifamily housing industry. It is designed to provide properties with a video intercom solution at a fraction of the cost of traditional systems and transform the way intercom systems are used.

InfoTycoon: A company that provides an enterprise-class mobile solution designed from the ground up to collect and manage data throughout each phase of the multifamily asset lifecycle – acquisition, renovation, operation, disposition – adding value at every step. It is an integrated solution that enables owners and managers to make smarter and faster acquisition and ongoing-operating decisions.

RentMetrics: A technology company that makes it possible to track both institutional and shadow inventory, providing crucial market detail in key urban markets like San Francisco and New York. It allows multifamily owner/operators to track the rental market on a daily basis, and see how each floor plan at each community is performing against the market in real-time.

In the end, the judges selected InfoTycoon for its proprietary technology that speeds up the due diligence process by up to 75% because inspection data is entered directly into the system instead of manually coded from walk sheets. The technology saves time while minimizing human input error and reducing risk, thus providing owners access to more complete and accurate information faster than ever before.

Atlanta based InfoTycoon, was honored with the NMHC Innovator Award, $5,000 in cash and a one-year Advisory Committee membership in NMHC.

New York based Runs Like Butter, was crowned the People’s Choice Award winner.

Last year’s NMHC Innovator Award winner CommunityVibe was also on hand to give the audience and judging panel an update on their success over the last year.  CEO Kariithi Kilemi praised NMHC for opening doors for his product to evolve, gain mentors, customers and additional funding. CommunityVibe is a Software as a Service solution that helps property managers improve their Net Operating Income and associated renter occupancy levels through a focus on maintenance management and resident satisfaction. The platform is accessible on touch screen devices and available to property managers, maintenance teams and residents.