Yardi Donates $100,000 to The NMHC Walk For Our Troops, Benefitting Ride 2 Recovery Program 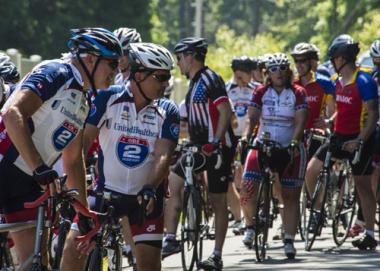 DALLAS, TX – Yardi Systems, Inc., a leading provider of software solutions for the multifamily housing industry, announced today at the NMHC 2013 OpTech Conference in Dallas, Texas, that it is donating $100,000 to NMHC Walk For Our Troops.

NMHC launched its inaugural “Walk For Our Troops” at its 2012 NMHC Annual Meeting. The event was a resounding success, with NMHC members and firms donating again in 2013, doubling the original year's donation to over $165,000. The walk had over 60 companies as sponsors, and 100 people participated in the walk/run. The 2014 Walk is off to an amazing start with a $100,000 donation from Yardi Systems, Inc.

At the upcoming 2014 NMHC Annual Meeting at the Boca Raton Resort & Club in Boca Raton, Florida, NMHC hopes to make the third annual walk even bigger! NMHC will hold the 3rd Annual Walk for Our Troops on Thursday, January 23rd, from 6:30 AM to 7:15 AM.

The NMHC Walk For Our Troops will benefit Ride 2 Recovery. Ride 2 Recovery (R2R), a charitable organization, in partnership with the military and the VA Volunteer Service Office, benefits our country’s wounded veterans and healing heroes with mental and physical rehabilitation programs that features cycling as the core activity.

Ride 2 Recovery played an important role in the life of one of the apartment industry’s own: Clay Hunt, son of Stacy Hunt of Greystar.  As a Marine Corporal, Clay earned a Purple Heart after being wounded by a sniper's bullet in Iraq.  He subsequently returned to combat in Afghanistan. Upon his return home, he lobbied for veterans on Capitol Hill and performed humanitarian work in Haiti and Chile. He joined Ride 2 Recovery cycling trips with other veterans in his area. Unfortunately, Clay lost his battle with PTSD in 2011 at the age of 28. Depression in our veterans is real, and we must support those who fight for us every day.

NMHC is asking its members to honor all the veterans, including Clay Hunt, and their families who have gone through the struggle. We are asking all NMHC members to make this event a priority. To participate in this important event, register here.