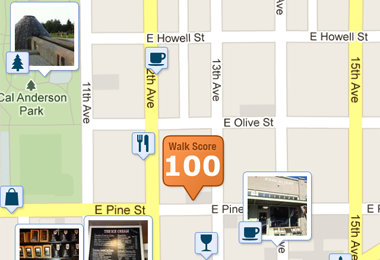 SEATTLE, WA - Just in time for 2014 New Year's resolutions to live healthier and save money, Walk Score issued the company's 2014 ranking of Most Walkable U.S. Cities and Neighborhoods. The new ranking helps empower Americans to find places to live that offer a breadth of nearby amenities including food, entertainment, shopping, schools and parks as well as easy access to bike lanes, car shares and public transit so they can leave their cars at home more often.

Visit each city page on Walk Score to find a list of the most walkable local neighborhoods including "Walker's Paradise" neighborhoods where most daily errands do not require a car.

"Being able to walk out your door and be at your destination - whether that be your job, school, park, grocery store or restaurant - is great for your wallet, health, and quality of life," said Josh Herst, CEO Walk Score. "For decades, Americans have tended to drive more every year, but that's changing. Today commuting by bus, bike and foot are on the rise as more people choose apartments and homes in walkable neighborhoods and with shorter, cheaper and happier commutes."

The Walk Score methodology
The 2014 ranking of Most Walkable U.S. Cities and Neighborhoods is based on a proprietary algorithm and analysis of over 10 million addresses and over 2 billion walking routes to neighborhood amenities across 2,500 cities and more than 10,000 neighborhoods. Walk Score's ranking is the only national, quantitative walkability rating. Cities and neighborhoods are rated on a scale of 0-100, with locations receiving a score of 90-100 deemed a "Walker's Paradise." Detailed ranking methodology and a complete list of ranked cities and their neighborhoods can be found at walk.sc/2014ranking

Resolve to live healthier, happier and to save money in 2014
Independent research has demonstrated that living in walkable neighborhoods with good public transit contributes to a happier and healthier lifestyle.[1]  In fact, the majority of Americans rate being within a short commute to work and within an easy walk of neighborhood amenities as key criteria when deciding where to live. This trend is even more pronounced among Millennials (age approximately 18-30), 70% of whom rate walkability as important or vital when deciding where to live and one third of whom will pay more for the ability to easily walk to shops, work and entertainment.

The average American spends over $9,000 per year on their car making cars the second largest expense for most households, costing more than food, clothing and health care.

The average resident of a walkable neighborhood weighs eight pounds less than someone who lives in a sprawling neighborhood.

"The typical American family spends 1/5th of their income on transportation and countless hours are wasted commuting long distances," said Jeff Speck author, Walkable City: How Downtown Can Save America, One Step at a Time. "Walk Score is leading the way in helping people make smart and informed decisions about where to live. Nothing makes as big of an impact on your health and quality of life as finding a better commute and living in a walkable neighborhood."