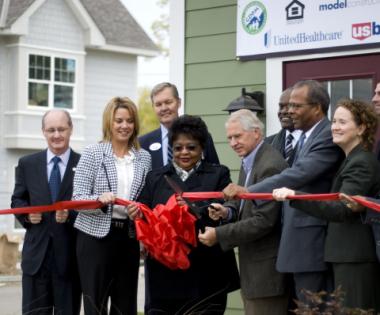 DAYTON, OH - UnitedHealthcare and U.S. Bank joined community leaders, development partners and new residents to celebrate the grand opening of Germantown Village. The new, 60-unit affordable-housing community represents a major milestone for the area as the first completed development in a neighborhood revitalization initiative that is bringing new housing and other improvements to Dayton’s Germantown-Broadway area.

UnitedHealthcare invested $8.9 million for the $12.8 million affordable-housing community through a partnership with U.S. Bank subsidiary U.S. Bancorp Community Development Corporation. UnitedHealthcare’s funding was secured through the use of Low-Income Housing Tax Credits (LIHTC), approved by the Ohio Housing Finance Agency. U.S. Bank also provided a construction loan for the benefit of the development, bridging the LIHTC equity during construction. Additional funding was provided by the U.S. Department of Housing and Urban Development (HUD), the Ohio Housing Finance Agency and the City of Dayton.

The collaboration between UnitedHealthcare and U.S. Bank brings together one of the nation’s top health and well-being companies and one of the nation’s leading banking institutions to provide innovative financing for community developments using federally sponsored tax credit programs.

“UnitedHealthcare is grateful for the opportunity to be a major investor in Germantown Village, working with the community of Dayton and U.S. Bank to expand access to affordable housing and help revitalize this area through new construction, economic development and job growth,” said Tracy Davidson, president of UnitedHealthcare Community Plan of Ohio.

“Our shared commitment to affordable, quality housing is increasing housing options available for families living in Dayton,” said Ron Amos, market president of U.S. Bank in Dayton. “We’re proud to partner with UnitedHealthcare to help ensure that people in need of affordable housing have a place to call home.”

Germantown Village is located near downtown Dayton, the historic Wright-Dunbar Village and the Greater Dayton Recreation Center. Developed by The Michaels Organization, a leading developer and manager of affordable, mixed-income and military housing, the four-acre community is designed to complement the historic character of nearby areas and be a prominent feature of the neighborhood’s streetscape. More than half of the apartments will offer rents affordable to households at or below 50 percent of the area median income.

The 60 apartments, in five two- and three-story buildings, consist of 20 one-bedroom, 20 two-bedroom and 20 three-bedroom units. Apartments include Energy Star appliances, ceramic tile, and ceiling fans, among other amenities. Ten percent of the units are Americans with Disabilities Act (ADA)-compliant. The new community will also include a playground, a garden, walkways and a community room.

The $8.9 million investment by UnitedHealthcare in Germantown Village is part of its Affordable Housing Investment Program, which has provided more than $100 million in financing for community developments throughout the United States, $35 million of which is in partnership with U.S. Bank. The program is one of several community initiatives undertaken by UnitedHealthcare that is providing millions of dollars each year to help fund local infrastructure projects to improve the quality of life for residents in communities where UnitedHealthcare conducts business.