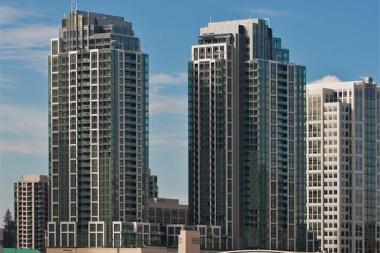 Schnitzer West marketed the multi-family residential property for sale earlier this year to capitalize on the increasing demand for best-in-class, luxury real estate in Bellevue and across the broader U.S. West Coast. Opened in 2010, The Bravern Residences consists of two 33-story residential towers totaling 455 units connected by a private 25,000-square-foot amenities plaza. Appointed with craftsman-quality finishes, the Residences are positioned to satisfy the needs of discerning residents seeking a highly sophisticated apartment community with the amenities of a luxury hotel.

The Residences are the final component of The Bravern to be sold. In September of 2010, Principal Real Estate investors acquired The Bravern Office Commons, consisting of 750,000 square feet in two towers, fully leased to Microsoft. In March 2012, The Shops at The Bravern, a high-fashion open-air shopping environment anchored by the Northwest's only Neiman Marcus store, and home to Hermès, Louis Vuitton and Ferragamo, was sold to the Ashkenazy Acquisition Corporation, which owns iconic landmarks such as Faneuil Hall in Boston, Union Station in Washington, D.C., and distinctive buildings housing venerable retailers Barneys New York in Beverly Hills and Prada at 25 and 30 E. Oak St. in Chicago.

Originally developed as luxury condominiums, The Bravern Signature Residences were strategically repositioned as a luxury apartment community in 2010 when residential ownership demand shifted to renter demand. The conversion to luxury apartments allowed The Residences to successfully capture the growing residential demand and create a stabilized community, with market-leading rents, high occupancy and low turnover. The property has achieved and consistently maintained 94 percent occupancy and is commanding a 15 percent rental-rate premium to the downtown Bellevue apartment market.

"This was the ideal time to transition the asset," said Greg MacDiarmid, regional operating partner and chief investment officer of Schnitzer West. "Downtown Bellevue is undergoing a major revitalization through significant investment in upscale apartment homes, hotels and commercial office space, designed to attract families and professionals seeking Bellevue's emerging urban life style. While there are nearly 800 workforce housing apartment units currently under construction, there is a scarcity of best-in-class, luxury apartment community properties. The Bravern Residences are positioned superior to market, given the consistent stabilized residency and unparalleled lifestyle experience. The Signature Residences will remain the premier address, not only in Bellevue but in the broader Puget Sound Region, and will continue to command top-of-the-market rents."

Nationally, the Puget Sound region is viewed as a core market for investment due to the underlying economic conditions and projected growth in the region.

"Vibrant and distinct neighborhoods are important to Bellevue," said Chris Salomone, director of planning and community development for the City of Bellevue. "Over the past decade we've seen Bellevue's downtown population grow as more people are choosing to not only work in downtown, but to also live here. Thanks to the support of residential communities like The Residences at The Bravern, this new and thriving neighborhood is anticipated to nearly double in population over the next 20 years."