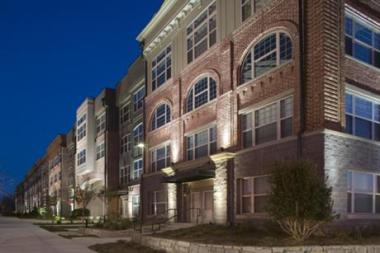 CARROLLTON, TX - Apartment occupancy remained tight during the third quarter, and rents continued to climb at a pace above the historical norm, according to MPF Research, an industry-leading market intelligence division of RealPage, Inc. The healthy quarterly performance reflected strong leasing activity at new developments coming on-stream plus solid pricing power at most already-full existing properties. MPF Research analysts highlight the nation’s latest apartment occupancy and rent growth statistics as well as other key performance indicators in a discussion found at www.realpage.com/MPFQ3-2013-Report.

Occupancy in the nation’s 100 largest metros averaged 95.4 percent during the third quarter. Occupancy has been hovering around the essentially-full mark of 95 percent for two years, with slight moves seen from one quarter to another aligning with normal seasonal patterns.

Effective rents for new leases grew 1.2 percent during the quarter, taking the annual pace of increase to 3.2 percent. Middle-market projects, which comprise the largest block of the nation’s total apartments, now rank as the apartment rent growth leaders by product segment. Pricing for those units climbed 3.5 percent over the past year, versus growth of approximately 3 percent in the bottom-tier communities and just over 2 percent in the top-of-the-market existing developments.

“Middle-market properties are in the sweet spot right now,” according to MPF Research vice president Greg Willett. “Only a handful of units are available in that product niche across most metros, and the residents living in that stock generally can’t afford to buy housing or to rent the high-end new apartment supply that’s being delivered now.”

“More modest rent growth in top-tier product reflects the impact of new units moving through initial lease-up,” Willett said. “While those new completions are leasing very quickly, the best existing properties are experiencing a bit more resident turnover, since some households are opting to move from the top existing product to the even-better brand new stock. The units that get vacated fill again pretty quickly, but that turnover does have a tendency to slow rent growth.”

Demand for 47,107 apartments registered across the country’s 100 largest metros during the third quarter. That figure was down from the demand totals seen in the second quarter or in 2012’s third quarter, primarily reflecting somewhat limited product availability. “With occupancy so tight in the existing inventory, demand can’t move meaningfully above the completion volume,” said Willett. Properties totaling 44,799 units were finished during the third quarter.

Considerably more apartment product will become available during the next few months, according to the MPF Research count. The firm shows properties totaling about 70,000 units scheduled to wrap-up construction during the fourth quarter, compared to completions that have averaged 36,000 units per quarter so far in 2013. Total ongoing construction across the nation’s 100 largest metros stands at 308,953 units. The ongoing construction pace has held at just over 300,000 units since the beginning of 2013.

Among large individual metros, Oakland moved into the #1 position on the list of the country’s annual rent growth leaders as of the third quarter. Pricing for new leases grew 7.9 percent during the past year. Denver-Boulder’s ranking also improved, as the market’s 6.8 percent annual rent growth pace was the second-best nationally.

While San Francisco slipped from its previous top spot for annual rent growth, pricing power remained strong with rates up 6.6 percent on an annual basis. The next three positions also went to metros in the red-hot Pacific Northwest region, as rents climbed 5.9 percent in both San Jose and the Seattle-Tacoma area and 5.7 percent in Portland.

Miami returned to the list of annual rent growth leaders for the first time in several years during the third quarter, as pricing improved 5.0 percent on an annual basis. The yearly growth pace was 4.8 percent in Houston and 4.2 percent in both Austin and Nashville.

Metros that just missed the cut-off point for the best-performers list included Fort Worth, West Palm Beach and the southern California trio of Orange County, San Diego and Los Angeles.

“Improving performances in southern California are one of the key regional storylines for the quarter,” according to Willett. “Annual rent growth in much of the area now is above the national norm, after these markets ranked as middle-of-the-pack performers a year ago and significant laggards two years ago.”