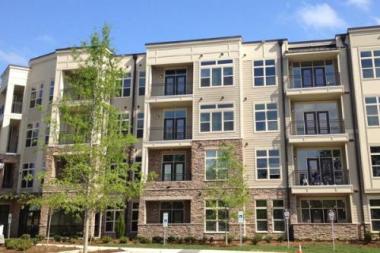 CLEVELAND, OH - Associated Estates Realty Corporation announced it has entered into a definitive purchase agreement and completed due diligence with respect to a seven-asset portfolio of Class-A apartment communities located in the Southeast and Mid-Atlantic (the "Portfolio").  The 1,606-unit Portfolio is comprised of 462 stabilized units, 349 units currently in lease-up and 795 units being constructed by the current owner that will be sold to the Company upon their completion.  The Portfolio is located in high growth submarkets in the Raleigh-Durham, Charlotte, Atlanta and Tampa markets.

The Portfolio has an aggregate purchase price of approximately $324 million, resulting in a blended nominal cap rate of 5.5% on year one stabilized net operating income.  Six assets will be acquired free and clear of debt, while The Apartments at Blakeney acquisition will include the assumption of a $28 million loan.  The Portfolio has an average year built of 2012.

The Company intends to fund the purchase of the Portfolio principally from the proceeds of property dispositions over the next twelve months.  The contemplated dispositions are primarily located in the Southeast and Mid-Atlantic.  Among the dispositions that will fund the Portfolio purchase are five assets with secured debt that is being repaid on October 1, 2013.  These five assets have an average age of 23 years and were purchased in 1998 for a total of $99 million.  Proceeds from these asset sales are expected to be in the range of $230 to $240 million.  These sales would result in a blended, unlevered IRR in excess of 13%.

"This Portfolio acquisition is consistent with our plans to continue to grow younger in markets with strong household formations and high paying jobs.  The expected pricing for the properties we plan to sell, once again, demonstrates our ability to create significant value from buying, developing and managing apartment communities.  These new acquisitions should position Associated Estates to continue to deliver sector leading same community NOI growth over a long period of time," said Jeffrey I. Friedman, President and CEO.

St. Mary's Square, built in 2013 and containing 134 units in a four-story, midrise building with podium parking, is located in the Glenwood South submarket of downtown Raleigh, NC.  The property is currently in lease-up, and is scheduled to reach 95% occupancy in November 2013.

Glenwood South is the focal point of the new, urban downtown Raleigh, with shops, restaurants and nightlife all within a few blocks of St. Mary's Square.  In addition, Raleigh's downtown has evolved into a hub of culture and entertainment for the Research Triangle region.  Nearly 40,000 people are employed downtown in the academic, government and private sectors.

The Lofts at Weston, built in 2013 and containing 215 units in a four-story, midrise building with surface parking, is located in the Weston submarket of Cary, NC.  The property is currently in lease-up, and is scheduled to reach 95% occupancy in December 2013.

The Lofts at Weston is located approximately one mile west of the SAS Institute's international headquarters.  SAS is the world's largest private software firm and Cary's largest employer with over 4,800 employees.  The property is also within a mile of the 1.4 million square foot Weston Business Park, a 25-acre mixed-use development.

St. Mary's Square and the Lofts at Weston offer an easy commute to the world-renowned Research Triangle Park, the area's most significant employment center, comprised of nearly 175 companies with approximately 40,000 employees.

With the addition of these two properties, the Company will own five Class-A properties, containing a total of 1,109 units, in the Raleigh-Durham market.

The Apartments at Blakeney, built in 2008 and containing 295 units in garden-style buildings with surface parking, is located approximately three miles south of Ballantyne Resort and the 535-acre Ballantyne Office Park, which contains over 4 million square feet of Class-A office space.

Alpha Mill Phase I, built in 2007 and containing 167 units in a mid-rise, adaptive re-use project with surface parking, was converted from a historic cotton mill and incorporates many of the architectural details from the original buildings.  Alpha Mill Phase II, currently under construction with an expected completion in Q1 2014, will consist of an additional 100 units in a new, four-story midrise building with surface parking.

Alpha Mill Phase I and II are located within a short walk from downtown Charlotte and over 22 million square feet of Class-A office space in the immediate area.  An extension of the 'Lynx Blue Line' light rail system is expected to locate a new station immediately adjacent to the property within the next few years, allowing rapid access to UNC Charlotte, South End and Uptown Charlotte.

Atlanta - One Property with 345 units:

Perimeter Town Center, currently under construction with an expected completion in Q4 2014, will contain 345 units in a five-story, mid-rise building with structured parking.

The property is located within the Perimeter Center submarket of Atlanta, with over 28 million square feet of office space, 4,000 businesses and 100,000 employees.  The property is also in close proximity to Atlanta's premier hospital facilities, three MARTA rail stations and numerous upscale retail venues.
With the addition of this property, the Company will own three properties, containing a total of 699 units, in the Atlanta market.

Varela, currently under construction with an expected completion in Q4 2014, will contain 350 units in a four-story, mid-rise building with structured parking.

Varela is located within the Westshore submarket of Tampa, FL.  Westshore is a principal business district of Tampa, with more than 11 million square feet of office space and 4,000 businesses with nearly 100,000 employees.  Westshore is also home to 32 hotels, two major upscale shopping malls and approximately 200 restaurants.  Additionally, Varela is located less than a mile from Tampa International Airport.

Perimeter Town Center and Varela will be acquired by the Company once construction is complete and the final certificates of occupancy are obtained.  The Company will perform all leasing and management services for the properties during the lease-up phase.