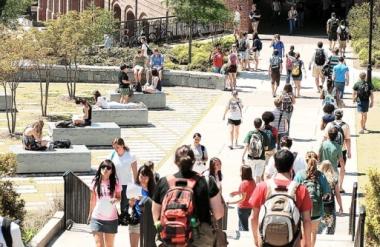 HOUSTON, TX - J Turner Research, a leading marketing research firm exclusively serving the multifamily industry, released findings of What Millennials Want: Resident Preferences in Student Housing Design and Amenities, a national research project conducted for the 2013 Multifamily Executive Student Housing Concept Community. As an official partner of the MFE Concept Community project, J Turner Research was engaged to survey college and university students across the country on their student housing location, design, and amenity preferences as well as the major influences on their housing selection. The results were released September 10, 2013 during an exclusive research presentation at the Multifamily Executive Conference in Las Vegas, NV.

In order to satisfy both cost and quality of life requirements, most students have moved (or desire to move) off-campus into modernized student housing communities, the survey finds. The competition for their rent dollars among developers thus hinges around several key factors: build communities close to campus, provide residents with ample storage areas and their own bathrooms (even if they share a bedroom), and feature a fitness center among the common area and amenities package. Key findings of the survey included:

Average monthly rent for students is $620 ($700 for graduate students).

The majority of students (43 percent) live with three roommates.

The top three most important design features for students include having their own bathroom (76 percent), big closets and storage areas (44 percent), and large kitchens (24 percent).

The largest number of students (38 percent) prefer to live in a mid-rise apartment, compared to a townhouse (33 percent) or single-family home rental (13 percent).

Proximity to campus remains critical for students as they seek off-campus housing, as 37 percent of students say walking is the ideal mode of transport to and from campus, with only 23 percent preferring to drive and another 20 percent preferring a university shuttle service. Still, most students (71 percent) do have a car, even if the largest share of them (40 percent) only drive it once a week or less. In contrast, the next largest group (31 percent) said they drive every day.

A majority of students (61 percent) expressed high levels of satisfaction regarding the available Internet bandwidth at their apartment community. Students also indicated that having strong cellular phone reception was critical to their rental experience. When asked how important cell reception was to their apartment community selection, 49 percent of students ranked its importance at the highest level. In contrast, only 27 percent of students ranked large apartment units as highly important.

“Over the past decade, we’ve clearly seen an exodus from on-campus, dorm-style living to a preference for modern, off-campus student housing,” said J Turner Research president Joseph Batdorf. “Along with that shift has been an expectation that communities deliver increased levels of Internet and cellular bandwidth in addition to the architectural and design necessity for spacious units, available storage options, and private bathrooms for residents living in multi-roommate apartments.”

Survey questions for What Millennials Want were developed in concert with the MFE Concept Community partners, including the magazine’s editorial staff and executives from American Campus Communities, Fountain Residential Partners, and multifamily architecture/design firms Humphreys and Partners and KTGY. Participating firms providing data for the survey include Campus Apartments, EdR, and Peak Campus Companies for a total of 6,472 responses nationally.

“Today’s students are the apartment renters of tomorrow,” said Batdorf. “Understanding their preferences in services, amenities, and community design helps the student housing and multifamily apartment industries better deliver the customer satisfaction that improves their businesses. We’re grateful to all of our partners who assisted in this ground-breaking project.”

To download an executive summary of findings from the What Millennials Want survey, please visit www.jturnerresearch.com/research.