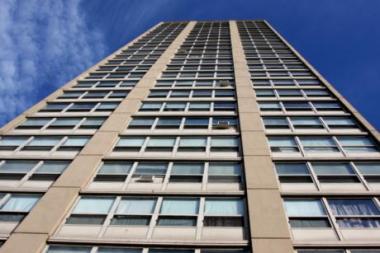 CHICAGO, IL - The AFL-CIO Housing Investment Trust announced $32 million of pension capital funding towards the major rehabilitation of 2101 South Michigan, a 26-story residential tower on Chicago's Near South Side.  Rehabilitation work on the aging property will improve the quality of life for residents and generate approximately 245 union construction jobs.

Built in 1971 with financial assistance from the Federal Housing Administration's grant program for affordable housing, the property is currently in need of major upgrades that will help the 250-unit building become more energy efficient.  The $42 million renovation project includes a new lobby, community room, and on-site laundry facility as well as energy-efficient appliances and new heating and cooling in the individual units.

"As older downtown neighborhoods experience growth with the corresponding demand for housing, it's very important to preserve and update existing units whenever possible," said HIT Executive Vice President and Chief Investment Officer Stephanie H. Wiggins.  "The HIT's investment in 2101 South Michigan will help ensure that quality housing near Chicago's downtown Loop, with its employment opportunities and other amenities, remains available to individuals and families at all income levels."

The 2101 South Michigan property is located in Chicago's South Loop neighborhood, an area that is experiencing a growing demand for residential space and neighborhood amenities. Ninety of the building's units are subsidized through a Housing Assistance Payment (HAP) contract administered by the Chicago Housing Authority (CHA), with 39 of those units restricted to residents age 62 and older. These units will remain affordable through a long-term HAP contract that extends the affordability component of the property for another 20 years.

In keeping with the HIT's labor requirements, all work on the project will be performed under collective bargaining agreements with Chicago's building trades unions. "The jobs are important to our members at a time when unemployment is still much too high," said Tom Villanova, president of the Chicago and Cook County Building and Construction Trades Council.  "We appreciate the HIT's continuing commitment to Chicago, and we look forward to helping improve the quality of housing on the Near South Side."

Over the past four decades, HIT has invested more than $400 million in 39 Chicago projects that have created or rehabilitated more than 9,000 housing units, of which more than 60% are affordable.  The pension fund investments have helped generate more than $860 million of development activity, while creating approximately 5,400 union construction jobs.

"HIT's union pension investments have helped address the housing and economic development needsa of working families in the Chicago area," said Lesyllee White, HIT's senior vice president and managing director of marketing.  "The HIT has financed the production of housing for low- and moderate-income families, while also generating union construction jobs. This is having a significant impact on working families. HIT is actively targeting Chicago to fund more income- and job-generating investments in 2013."