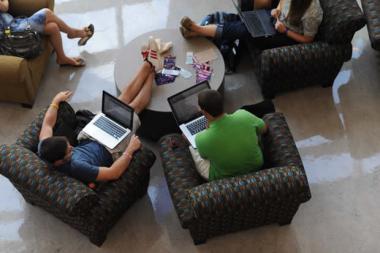 NEW ORLEANS, LA - Student housing has long set the tempo for multifamily design innovation. Students need, want, expect and, perhaps most importantly, are willing to pay for housing that can keep up with their ever changing tastes and preferences, technology needs and lifestyle essentials. As students have continued to redefine those elements—sometimes seemingly on a daily basis—many  gotta-have-it features in student housing design have gone from hot to not in just a few short years.

Student housing executives will be discussing how to both meet and adapt to these evolving needs and wants while showcasing some innovative student housing designs during the session “The Latest and Greatest in Design—What’s Hot and What’s Not,” at the 2013 NMHC Student Housing Conference and Exposition. This premier student housing event will be held Sept. 30-Oct. 2 at the Sheraton in New Orleans and is open to both NMHC members and non-members alike. With no attendance restrictions in place, companies are encouraged to send multiple employees to participate in the one-of-a-kind event.

MultifamilyBiz.com caught up with a few of the panelists for a preview of what’s in and out when it comes to emerging design trends.

At one time, having a wired phone connection in your dorm room would have seemed like a luxury. Now, it’s almost obsolete. Developers like J. Wesley Rogers, president and CEO of Athens, Ga.-based student housing developer Landmark Properties, is going away from wired housing properties altogether. He’s focused on bulking up his integrated Wi-Fi and high-speed Internet.

Instead of outsourcing Wi-Fi to his cable provider, Rogers is putting in his own wireless nodes and tripling bandwidth over what he offered just last year. He is also offering a cell phone service booster.

"We think this is a differentiator for us compared to product built even a couple of years ago," Rogers says.

Before laptops, tablets and smart phones were common among students, student housing developers would build business centers with individual, private computer stations. But as these portable devices have become nearly ubiquitous, allowing students to work from nearly anywhere—the coffee shop, the pool, a park bench—business centers aren't getting as much use as they once did. Now developers are trying to emulate the Starbucks model.

"We have more of casual networking area with cyber cafes and seating in the clubhouse for people to chill and work on a laptop," says Greg Faulkner, president of Humphreys & Partners Architects, an architectural firm based in Dallas. Faulkner says he still may include printers and scanners in these areas.

Despite the casual, social environment, developers haven't totally forgotten about studying. "We will still have some quiet areas for studying," Faulkner says.

Poses Over Pedals
In: Yoga
Out: Spinning

Brian Dinerstein, partner and president of The Dinerstein Cos., a student housing developer in Houston, says that, bigger gyms have become the norm at new student housing communities. With those larger spaces, there’s an emphasis on adding specialized workout areas.

However, while spinning classes were once all the rage, Dinerstein says he’s no longer carving out dedicated space for spinning. "We didn't notice people using the spinning rooms," Dinerstein says.

"It's more a function of what people like and don't like more than anything else," he says.

For more insight and information on student housing design trends, register now for the 2013 NMHC Student Housing Conference and Exposition.