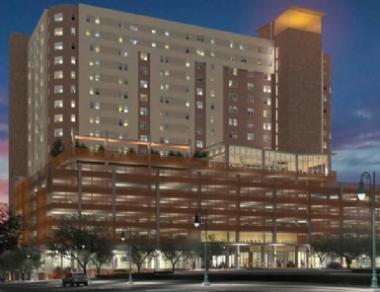 AUSTIN, TX - In response to rising demand for accelerated internet connectivity and underscoring its commitment to innovation, American Campus Communities, the nation’s largest owner and manager of high-quality student housing communities, announced that it will provide unprecedented internet service of up to one Gigabit per resident at the new The Callaway House Austin, an off-campus community that will serve students attending The University of Texas at Austin.

The Callaway House is expected to set a new standard in student housing products and services featuring 661 beds in full-service residence hall accommodations and 92 beds in penthouse apartment accommodations. The community is 100 percent leased for its August 2013 opening. American Campus chose Austin-based internet provider CampusConnect to deliver a number of industry firsts:

The Callaway House becomes the nation’s first student housing community to experience internet connectivity of up to one Gigabit per second per resident. Gigabit speed is equivalent to 1,000 megabits per second.

Direct gigabit connectivity to The University of Texas campus network.

“We understand how positive living environments can propel students’ college success and we have made it our fervent mission to create communities that are conducive to academic achievement,” said Bill Bayless, American Campus CEO. “This technology infrastructure meets the evolving demand for fast internet service desired by our residents for coursework, social media, online content and other emerging internet services. After an in-depth evaluation of internet providers, CampusConnect surpassed national and local names by their value proposition, expertise, and ability to execute. We are very pleased to have found a local partner to help us achieve this innovative milestone at The Callaway House.”

According to Jorge de Cardenas, chief technology officer at American Campus, “Consistent with Google’s recent announcement of their fiber initiative in Austin, we believe that significant improvement in internet connectivity will promote the productivity of our residents and encourage the emergence of new applications and services yet unknown. This infrastructure sets a new standard in student housing connectivity by removing bandwidth as a barrier.”