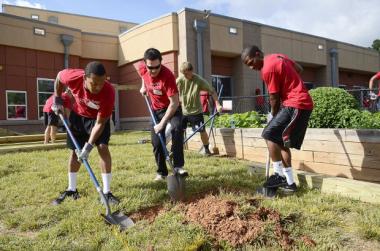 Since 1993, the Wells Fargo Housing Foundation has invested more than $278 million dollars in support of affordable housing and community revitalization programs, including $39 million in grants to credit and housing counseling agencies. It also has provided more than $18 million in grants through its Leading the Way Home® Program Priority Markets Initiative, which offers grants for large building or renovation projects.

“Today’s anniversary build demonstrates our long-standing commitment to affordable housing for families, which is a critical to the revitalization of neighborhoods,” said Kimberly Jackson, director of the Wells Fargo Housing Foundation. “On nearly every business day for the past two decades, Wells Fargo volunteers have rolled up their sleeves to make the dream of homeownership possible for families in need of affordable housing.”

“We congratulate the Wells Fargo Housing Foundation Team Member Volunteer program on reaching this incredible milestone,” said Jonathan Reckford, CEO of Habitat for Humanity International. “All of us at Habitat are grateful for the efforts of the volunteers and the Wells Fargo Housing Foundation who have partnered with thousands of low-income families to make sustainable homeownership possible.”

“Rebuilding Together and its affiliate network applaud the many hours dedicated by Wells Fargo team member volunteers to rebuild the homes and lives of low-income families across the country,” said John L. Fiegel, interim president and CEO of Rebuilding Together. “We congratulate the Wells Fargo Housing Foundation on its 20th anniversary and look forward to working with you to provide more safe and healthy housing in the future.”

In 2012, Wells Fargo’s total philanthropy and community relations efforts resulted in $315.8 million in investments with 19,500 nonprofits, including nearly $15 million for credit and housing counseling agencies. These efforts were supported by more than 1.5 million volunteer hours valued at $32.7 million* by more than 57,000 Wells Fargo team members.

For 2011, the value of one volunteer hour was $21.79, according to the Independent Sector, a U.S. coalition of more than 500 philanthropic organizations.