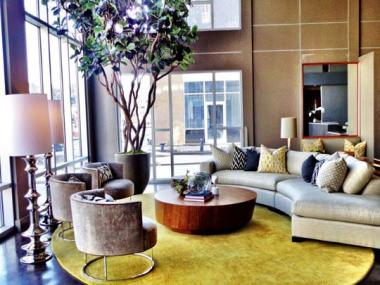 The award-winning design team continues to build upon its previous success with Lang Partners, LLC., which focuses primarily on high-density urban infill properties. Together, they are answering the increased demand for the urban pedestrian lifestyle by developing communities situated in the middle of the city’s major employment centers, public transportation and retail centers; a niche market dominated by the distinctive design style of Stephanie Moore-Hager and her team.

Uniquely cosmopolitan in and of itself is the award-winning Zang Triangle. Located in the heart of Oak Cliff, this 260-unit residential community is the first multifamily property built in the area in more than a decade. It offers exclusive amenities and an eclectic, engaging design style. The apartments carry an uptown Dallas feel and are a short walk away from the trendy Bishop Arts District. The vision for the design was to create a cozy oasis where residents would enjoy socializing and relaxing. The project came to life through creative and inscribed environments that are not trendy or over the top. Zang Triangle evokes a casual intimacy and warm modernism with an emphasis on art.

“Residents in this area call themselves ‘urban pioneers’ and that was the start of our design concept and style,” said Moore-Hager, MDG’s founding principal. “The Lang Group requested that I get in touch with my Bohemian side and think funky and eclectic – an alchemy of styles. We didn’t want to be the same; that meant making sure the residents don’t have to compromise something for another experience.”

Indeed, the property has earned remarkable recognition from its peers and the design community. Last month, Moore Design Group received the 2nd place award for the Commercial-Multifamily category at the 2013 ASID Dallas Design Ovation Awards for the Zang Triangle. The property was also featured in the February issue of Builder and Developer Magazine. In 2012 the Zang Triangle was chosen as a finalist for Best Midrise Apartment at NAHB’s Multifamily Pillars of Industry Awards.

Ron Harwick, AIA, CSI of JHP Architecture, who has worked with Moore on many esteemed projects, referred Moore Design Group to John Ausburn of the Lang Partners in 2009. The partnership began with the development of the Zang Triangle and has since evolved into a successful symbiotic relationship. The remarkable custom tree sculpture in the lobby stands as a perfect example of an architect collaborating with an interior designer to create something original and spectacular.

For Fort Worth residents, The Lancaster, a 253-unit community installed in May 2013, characterizes the ideal location of an urban design style guaranteed to attract the erudite individual. Meticulously designed with clean lines, warm tones and richly hued fabrics, Moore’s design team created a modern space filled with light that connects The Lancaster to its vibrant surroundings in the Arts District. Sustainable woods, customized wall coverings and a commissioned conference table by a local artist complete the refined contemporary palette. The lobby features a unique sustainable lighting sculpture from Aqua Creations’ ‘Jewel Collection’ that adds intrigue and whimsy. The movement of the suspended kinetic mobiles creates an elegant, theatrical environment.

Not limited to developing properties in Texas, Lang Partners and Moore Design Group also teamed up on the Park Avenue Lofts. The 258-unit multifamily residential project in Little Rock, Arkansas was installed in March 2013. Unlike anything Little Rock has experienced before, Park Avenue features luxurious amenities and offers unparalleled access to a flourishing collection of eateries, shops and offices. The design evokes a distinct energy and contrasting pieces bring a level of nature and the outdoors into the modern space.

Currently in the preliminary stages of development is Lang Partners’ fourth project, The District Lofts. The developer has cleared a 6-acre site at Maple Avenue and Butler Street, just blocks from the city’s thriving medical district. Construction on this 342-unit multifamily residential project began last month and apartments will be available for rent in late 2014. Indigenous and inspiring, The District Lofts are being designed specifically to encourage interaction and a sense of community.

In recent years, the former industrial neighborhood has seen a $500 million Love Field airport expansion, the addition of the DART rail and $2.5 billion in medical construction projects. The growth of Parkland Hospital and UT Southwestern is expected to generate 15,000 new jobs over the next two years, giving developers and designers the rare opportunity to accommodate the changing dynamics of the area with Moore Design Group fast becoming the gold standard leading the industry in urban design.