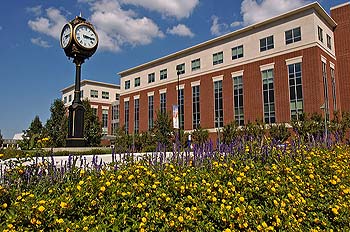 The Cleveland-based NRP Group, a full-service developer, general contractor and property manager, will invest over $30 million at the site of the old Akron Beacon Journal newspaper sorting and storage facility—originally a freight station for the Erie Railroad.

The existing building, which has been deteriorating for years, will be taken down to make way for new construction of “The Depot” student apartments. Vice President of Development at NRP Group, Aaron Pechota, said it was important to the group to retain some of the existing history of the building and to find a way to bring those elements into the interior design of The Depot.

“Some of the beautiful exterior eaves and other functional elements will actually be incorporated in the interior clubhouse and concierge area as decorative elements to preserve a piece of the history of the building,” said Pechota. “We are also salvaging the four monument ‘E’s, denoting the Erie Railroad, and incorporating them into the design of our new courtyard. NRP has been developing multifamily projects across the nation for 18 years, and we’re thrilled to build a student housing community right here in our own backyard.”

Students can choose from one-, two-, three- or four-bedroom floor plans, ranging from 592 to 1,386 square feet. Inside each apartment, students will have their own individually-keyed bedroom and bathroom, granite countertops, in-unit washer and dryer, walk-in closets, ceiling fans, and contemporary furnishings including a 42” flat screen television.

“The Depot is centrally positioned in an area that both the University of Akron and the City of Akron have made a substantial investment in over the past decade. We are confident that The Depot’s location, unparalleled design and countless amenities will make it THE first class living experience for Akron students.”

Leasing will begin in August of 2013, although units will not be move-in ready until August of 2014. During construction, a temporary leasing center will open at 446 East Exchange Street, just across from the stadium. NRP has partnered with Asset Campus Housing (ACH) to handle the leasing and on-site property management.

NRP is the eighth largest multifamily developer in the nation and was awarded The National Association of Home Builders (NAHB) “Multifamily Development Firm of the Year” award in 2012.