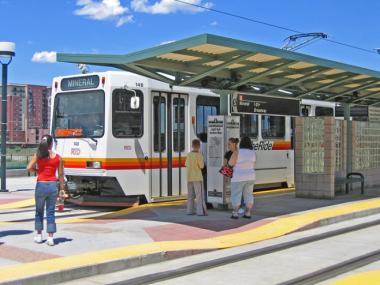 DENVER, CO - The Urban Land Conservancy's (ULC) investment along a new, 12-mile light rail line will ultimately bring more than $70 million in development value to the area, 600 units of housing including 400 affordable units, over 50,000 square feet of commercial space, a new Denver public library and 500 jobs.

On April 26, 2013, the Regional Transportation District's (RTD) West Rail Line of FasTracks opened.  Known as W Line, it will connect downtown Denver, Lakewood and Golden, transforming the way people live, work and make regional connections. ULC has been buying land and properties along the W Line for over six years, knowing that affordable housing and other community assets are critical components of successful public transit build out.

FasTracks is the largest transit expansion program in the nation. The country's first Transit-Oriented Development (TOD) Fund was created by the City of Denver, Enterprise Community Partners and ULC and became operational in 2010 to support ULC's purchase of properties at transit stations to preserve or create affordable housing. ULC utilized the $15 million TOD Fund to purchase two of the four properties they own along the W Line.

"Each new rail line is a catalyst for transit-oriented development in metro Denver, and ULC has been very strategic in our real estate investments, stewardship and partnerships on the W Line, leveraging resources to increase economic opportunities for low-income families, seniors and the community as a whole," said Aaron Miripol , President & CEO of ULC.

Jody Apartments: Jody is next to the Sheridan Station and was purchased in December 2007 in partnership with NEWSED for $3.5 million. The site has 62 units of affordable apartments on two acres.  Jody will be redeveloped at a higher density level under Denver's new zoning code (C-MX-8), preserving and creating permanently affordable housing in a mixed-use setting. Residents will not be displaced as a result of the redevelopment. The value of this projected development is $25 million.

Mile High Vista:  Located at Colfax Avenue and Irving Street within ¼ mile of the Knox and Federal/Decatur stations, this two-acre parcel was purchased in March 2011 for $2.14 million. The City and County of Denver purchased .84 acres of this site from ULC to build a new public library. Del Norte purchased a portion of the site to build 80 affordable homes and 10,000 square feet of community space. ULC is the master developer and has plans for a 20,000 square-foot commercial building. The value of the projected development is $30 million.

11th Avenue TOD: Located next to the Sheridan Station at 11th Avenue and Sheridan Boulevard, this .83 acre site was purchased for $350,000 in July 2012. ULC is partnering with Rocky Mountain Communities to develop 58 affordable senior housing units. The value of the projected development at this site is $10 million.

Villas at Wadsworth Station: Located at 1330-1337 Yukon Street in Lakewood, ULC preserved 100 units of existing affordable housing by purchasing the 2.36 acre site in December 2012 for $7 million. The site is 50 feet from Wadsworth Station.

ULC, a nonprofit organization established in 2003, uses real estate as a tool to enrich urban communities. In much the same way that a land trust preserves open space for future generations, ULC preserves real estate assets in urban areas to ensure their continued community benefit.