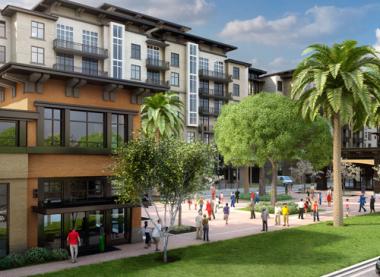 HOUSTON, TX - The Morgan Group, a leader in upscale multifamily development, construction and property management, has broken ground on a 331-unit midrise apartment development in Flagler Village. Morgan acquired the site, which is located just north of the Las Olas River in downtown Fort Lauderdale, in December 2012. First move-ins are projected for Summer 2014.

The site, which fronts Federal Highway, marks the return of The Morgan Group to south Florida and the company’s first development within Broward County. "It's great to be back in south Florida," said Chairman and CEO Mike Morgan. "We were very active in the area until the late 1990s and are looking forward to growing our presence here once again. Richard A. Buck is leading our regional development efforts and we've recently opened an office in Fort Lauderdale."

According to Buck, The Morgan Group's vice president and development partner for the southeast US, “While Morgan has remained active in Orlando and Jacksonville, we knew we wanted to get into this submarket before other developers saw the value that we see in Flagler Village. The area is ripe for new residential units and amenities that are designed specifically with urban professionals in mind.”

The Morgan Group, Inc. is a privately held national developer and manager of Class A multifamily properties with headquarters in Houston, Texas. Founded in 1959, Morgan also specializes in upscale urban construction and third-party property management across the United States. Since 1988, The Morgan Group has developed more than 15,000 units at a cost of more than $1.7 billion. More than 2,000 units are in the planning or construction stages in Texas and Florida.