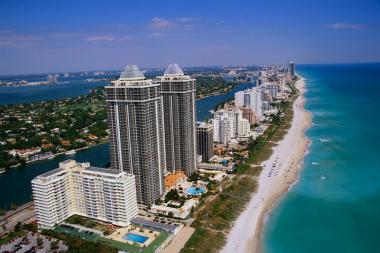 "Florida's housing market continues to demonstrate its recovery – March marks the 15th consecutive month that the statewide median sales prices for both single-family homes and for townhouse-condo properties rose year-over-year, according to Florida Realtors' data," said 2013 Florida Realtors President Dean Asher , broker-owner with Don Asher & Associates Inc. in Orlando. "The median price is up more than 15 percent for both single-family homes and for townhouse-condos.

"Meanwhile, buyer demand is increasing, but supply continues to be constrained in many areas. In March, the median days on market (the midpoint of the number of days it took for a property to sell that month) was 57 days for single-family homes and 61 days for townhouses and condos. That means 50 percent of homes on the market in Florida sell in two months or less."

Statewide closed sales of existing single-family homes totaled 19,631 in March, up 9 percent compared to the year-ago figure, according to data from Florida Realtors Industry Data and Analysis department in partnership with local Realtor boards/associations. Closed sales typically occur 30 to 90 days after sales contracts are written.

"We continue to be encouraged by the depth and breadth of the housing recovery," said Florida Realtors Chief Economist Dr. John Tuccillo . "State numbers are up in virtually all important categories and down where they should be down. Even with the difficulty of access to financing for households, we still see the growth in the market continuing for at least the next 18 months.

"Inventory remains an issue, but this is fast becoming a sellers' market and as sellers realize this, we expect inventories to rise as we approach the last quarter of 2103. Over the long term, we need to correct the imbalance between investors and owner-occupier households that has developed because of financing issues if the market is to prosper for a long time."

According to Freddie Mac, the interest rate for a 30-year fixed-rate mortgage averaged 3.57 percent in March 2013, down from the 3.95 percent average during the same month a year earlier.