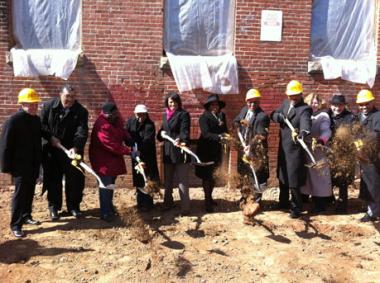 “We are fortunate to have many grand buildings that add to the character of nearly every community in Baltimore,” said Mayor Rawlings-Blake. “Soon, the historic Columbus School building will be buzzing with the sound of children and families taking advantage of new opportunities in a growing city.”

The Columbus School Renovation Project is the first for the non-profit HSA since opening offices in Baltimore last year and the latest in a series of new housing projects by Woda, a leading developer in affordable housing, targeting the North Avenue corridor. The historic building will open as the Columbus School Apartments this fall to families with incomes at 60% or less of the Baltimore City Area Median Income. Located on the northeast corner of the 2000 block of E. North Ave. at Washington St., the Columbus School Apartments will yield 68,000 square feet of renovated space and offer one and two bedroom apartments with modern amenities. The historic building will boast a new entrance, multi-story lobby and elevator core, community room, computer lab, and education center. The project will utilize high efficiency mechanical systems throughout, with Energy Star lighting and appliances, meet Baltimore City Green Building standards and achieve Leadership in Energy Environmental Design (LEED) Silver designation.

our community partners to preserve an incredible piece of architecture,” said Michael Barland, executive director of Urban Development for HSA. “The opportunity to meet a critical need for affordable housing in this community underscores the core mission of our organization. Additionally, The Woda Group’s development and construction expertise are the right fit for

“Our vision for a revitalized North Avenue corridor that boasts quality affordable housing is becoming a reality,” said Kevin Bell, senior vice president for Woda. “The historical significance of North Avenue as a major east-west corridor that once represented the northern boundary of Baltimore City can no longer be overlooked. North Avenue’s cornerstones - Coppin University, MICA, March Funeral Home, National Great Blacks in Wax Museum, faith based organizations, and other historical landmarks - underscore the need to move forward now with a comprehensive plan for revitalizing the North Avenue corridor from Hilton to Milton Avenues. The availability of decent, affordable housing in a recovering economy is fundamental to our success as a partner in the community. As important, is the opportunity this project presents to help boost Baltimore’s economy by advancing our commitment to employ local residents during construction.” HSA and Woda have partnered with the Center for Urban Families and the Laborer’s Union of North America to screen and refer Baltimore City residents for job training and hiring during construction.

“Under the leadership of Governor Martin O’Malley and Lt. Governor Anthony Brown, we have helped finance the production of desirable, energy efficient affordable rental housing units such as the Columbus School Renovation Project all over Maryland,” said Maryland Department of Housing and Community Development Secretary Raymond Skinner. “These are projects that create jobs, strengthen communities and provide first-class places to live for families, senior citizens and disabled individuals.”

Financing for the Columbus School Apartments is provided by the Maryland Department of Housing and Community Development, Bank of America , Capital One and Hudson Housing Capital. The project is in collaboration with architects Cho Benn Holback + Associates and the engineering firm of Gower Thompson. The project is also supported by Edgewood Management Corporation, Mincin, Patel & Milano, Inc., MIN Engineering and Doo Consulting.