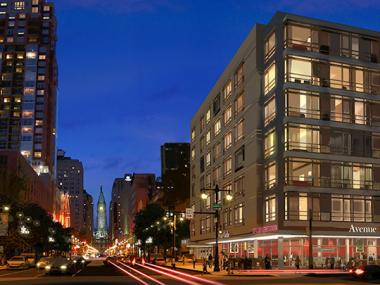 PHILADELPHIA, PA - Dranoff Properties, a premier developer and owner of luxury apartments and condominiums, today celebrated the groundbreaking of Southstar Lofts, a new high-end multifamily mixed-use property. Located on the prominent corner of Broad and South Streets, this intersection is a crossroads between the eclectic vibe of South Street and the cultural scene of the Avenue of the Arts, creating an area unlike any other in Philadelphia. Southstar Lofts will feature 85 luxury, loft style apartments, as well as 10,045 square feet of street level commercial space to further position the Avenue of the Arts as a premier living, shopping and dining destination.

To celebrate the groundbreaking of Southstar Lofts, Dranoff Properties hosted a press conference for civic and business leaders, city officials and constituents of the Avenue of the Arts, which is the major cultural and entertainment corridor in Philadelphia. This year marks the 20th anniversary of the Avenue of the Arts, and to pay homage to this important milestone, Dranoff Properties has created a time capsule, filled with a cache of goods from key partners along the Avenue, to commemorate the current and future success of the district. Scheduled to be unsealed in 2043, items in the Dranoff Time Capsule include a menu from Sbraga, 2010 Top Chef winner Kevin Sbraga’s restaurant, a ballet slipper from The Pennsylvania Ballet and a bellman’s cap from Dranoff’s own Symphony House.

“The groundbreaking of Southstar Lofts is a celebration for Dranoff Properties and also a personal triumph for me,” said Carl Dranoff, president and CEO of Dranoff Properties. “The vision for what South Broad Street can be is exciting and it is a project of which I am proud to be a part. As we look down the Avenue of the Arts, Broad and South was a perfect location for development as it provides ideal living space for Philadelphia’s growing community of sophisticated professionals, who are fully engaged in the business, social and cultural scene that defines this corridor. The addition of Southstar Lofts and the marketable commercial space it offers will not only drive additional feet on the street and further the development of this important district, but also breathe new life into this established neighborhood.”

Continuing Dranoff Properties’ commitment to sustainability, Southstar Lofts will be the company’s second “green” building on the Avenue of the Arts, with the first being Silver LEED certified 777 South Broad. The new property will be conveniently located next to the South Street Station of SEPTA’s Broad Street subway line as well as two bus routes, making Southstar Lofts a walkable transit-oriented property, which aims to reduce carbon emissions and encourage healthier lifestyles. Residents will also have access to unique “green” amenities, including the complimentary Dranoff Bike Share program, which will expand to Southstar Lofts upon completion of the building.

Mayor Michael A. Nutter, a champion of Center City development and green initiatives, expressed his strong support saying, “Southstar Lofts is an exciting new property for Philadelphia that will drive economic growth by attracting new residents and businesses to the heart of our city. The Avenue of the Arts has become a cultural landmark over the past 20 years and it’s encouraging to see veteran developers, like Carl Dranoff, building on the Avenue and positioning the area for long-term success.”

“The Avenue of the Arts is home to some of the greatest restaurants and entertainment venues in the city, and for the future residents of Southstar Lofts, all of those attractions will only be blocks away," said Dianne Semingson, Chairman of the Avenue of the Arts, Inc. “Carl Dranoff’s continued investments along the Avenue are helping to reinvigorate the street, and we hope other developers and investors see the value in this incredible arts district.”