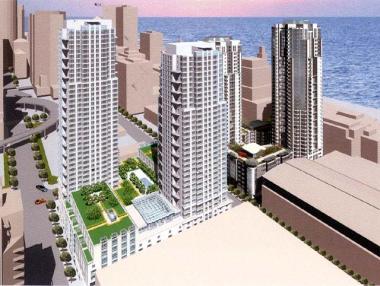 SAN FRANCISCO, CA - Tishman Speyer and China Vanke Co., Ltd. announced that they have formed a joint venture to develop a premier high rise residential condominium project at 201 Folsom Street in San Francisco. The planned development, which will be managed by Tishman Speyer , represents the first North American investment for China Vanke , the world's largest real estate developer. Financial terms of the joint venture were not disclosed.

The joint venture agreement was completed at a formal signing ceremony held on February 13 in San Francisco. China Vanke Chairman Shi Wang was joined by the company's Strategy and Investment team, while Tishman Speyer was represented by President and Co-CEO Rob Speyer, along with executives in charge of the firm's China and San Francisco offices.

The project will consist of two connected residential towers – 37 and 42 stories high – with a total of 655 residences. The site is located across the street from The Infinity, a pair of residential towers that also were developed by Tishman Speyer. The Infinity's residences commanded prices ranging from $600,000 to $6 million, and it was believed to be the fastest selling project in the United States in 2009.

For Tishman Speyer , the new project will enhance its standing as one of the leading developers and owners of iconic sustainable properties in San Francisco, which is one of the best performing residential and commercial real estate markets in the United States. In 2012, the firm broke ground on its Foundry Square III office project, and is finalizing preparations to build an office tower at 222 Second. In addition to The Infinity, Tishman Speyer previously developed the 555 Mission Street office building, and its current local holdings include 650 California Street, One Bush Street and 595 Market Street.

The joint venture with China Vanke expands Tishman Speyer's relationship base in China, where it has raised funds successfully from Chinese investors and currently has approximately 20 million square feet at various stages in its development pipeline.

For China Vanke, the joint venture marks the beginning of its planned expansion outside China, as indicated in recent public statements. The company anticipates much synergy and mutual benefits from this project and will continue to explore similar opportunities abroad.

"China Vanke has always been a company with a global view, good at learning from excellent peer enterprises. We are entering the US market to continue this learning process, to understand business models in a mature market and accumulate management experience through project cooperation," said China Vanke Chairman Shi Wang . "We selected the San Francisco 201 Folsom Project as Tishman Speyer is a global industry leader and a business partner who inspires our full confidence."

"This landmark joint venture with China Vanke in San Franciso complements the growth of our platform in China, and we could not be more excited about working closely with such a spectacular company," commented Tishman Speyer President and Co-CEO Rob Speyer. "We welcome the opportunity to create another iconic residential property in San Francisco, following the great success of The Infinity."