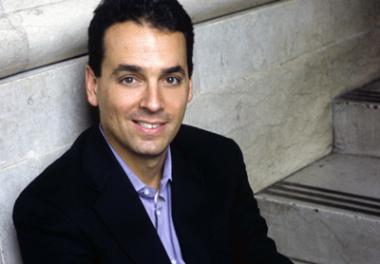 One of the world’s leading business minds, Daniel Pink’s forward-thinking ideas and blockbuster books are reshaping how organizations approach innovation, motivation and talent. Like it or not, we’re all in sales now. One in 9 American workers now earn a living by trying to get someone else to make a purchase. But as Daniel Pink shows in his latest book, To Sell is Human, the other 8 in 9 are spending huge portions of their days in “non-sales selling” - convincing, persuading and influencing others.

As he did in his long-running New York Times best sellers Drive and A Whole New Mind, Pink lays out the science for his counterintuitive insights, offering vivid studies and tools to make organizations more effective. Pink’s previous books have been translated into 33 languages and have sold well over 1 million copies in the U.S. alone. His TED Talk on the science of motivation is one of the 20 most watched TED Talks of all time. In 2011, Harvard Business Review and Thinkers50 named him one of the top 30 business thinkers in the world. His articles appear in the New York Times, Harvard Business Review and Wired. He advises startups and Fortune 100 companies on talent, engagement and innovation. Pink served from 1995 to 1997 as chief speechwriter for Vice President Al Gore. He also worked as an aide to U.S. Labor Secretary Robert Reich and in other positions in politics and government.

The 2013 NMHC OpTech Conference & Exposition will be held November 11 – 13 at the Hilton Anatole in Dallas, Texas. For further information please visit NMHC’s Website.

Based in Washington, DC, NMHC is a national association representing the interests of the larger and most prominent apartment firms in the U.S. NMHC’s members are the principal officers of firms engaged in all aspects of the apartment industry, including owners, developers, managers and financiers. Nearly one-third of Americans rent their housing, and more than 14 percent live in a rental apartment.