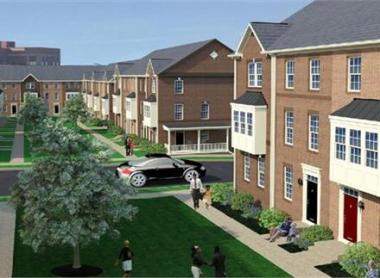 BALTIMORE, MD - Construction of the first phase of a massive revitalization of O’Donnell Heights, a distressed public housing community located on Baltimore’s southeast side, is poised to begin, now that the developers have secured funding for the $20 million redevelopment effort.

The joint venture team of The Michaels Development Company and Greater Baltimore AHC Inc. closed January 18 on the financing for O’Donnell Townhomes 1, which will be a newly constructed rental community offering 76 units of affordable housing. Built by Bozzuto Construction Company, the new townhouse community will serve families from low to moderate incomes, in line with the surrounding neighborhood, as well as individuals with disabilities.

“The unwavering support of the city and the state, as well as residents, community groups, and local businesses, is really what made the difference in moving this development forward,” said Ava Goldman, President of The Michaels Development Company. “We are excited to now begin transforming their vision of a vibrant, diverse and sustainable community into a reality,” said Goldman.

For years, Baltimore City, the State of Maryland, and the Housing Authority of Baltimore City (HABC) have been seeking to replace the outdated public housing complex, which was originally built in 1942 and last modernized in 1983. The plan to transform the important O’Donnell Heights neighborhood—which encompasses more than 60 acres near Johns Hopkins Bayview Medical Center—into a community that will serve families with a variety of incomes was crafted by the HABC working in concert with local stakeholders, including current and former residents of O’Donnell Heights. In 2010, the HABC selected the Michaels/AHC team as its private sector master development partner through a competitive process. The phased development plan, which was crafted with substantial input from the O’Donnell Heights Tenant Council, was designed to minimize the interim relocation of the 300 households who currently reside there.

The funding for O’Donnell Townhomes 1 includes $13.4 million in equity raised from the sale of federal Low Income Housing Tax Credits awarded by the Maryland Department of Housing and Community Development; $1.5 million in HOME funds from the U.S. Department of Housing and Urban Development awarded by Baltimore City, and $900,000 from the state’s Rental Housing Funds. Additional financing came from the Federal Home Loan Bank of New York, which awarded this phase of O’Donnell Heights just shy of $1.4 million and a $3.6 million permanent loan from Bellwether/Enterprise. Bank of America invested in the tax credits, which were syndicated by Prestige Affordable Housing Equity Partners, an affiliate of The Michaels Development Company.

"High quality new development in the O'Donnell Heights community is long overdue. We are proud to have worked with the many stakeholders to successfully bring significant financial investment to a deserving part of Baltimore City,” said Andrew M. Vincent, Director of Greater Baltimore AHC.

The construction of O’Donnell Heights Townhomes, which will include new roads and public infrastructure, is expected to generate between 100 and 120 jobs for the local community. The apartment community will be Green Communities certified, and units are designed to meet Energy Star, and sustainability standards that will ensure long-term operating savings. Landscaped micro bio-retention facilities designed throughout the site will properly manage storm water runoffs. In addition, residents of the community will have access to new social services, including after school programs, job training, and other programs that will be developed by Interstate Realty Management Company, in conjunction with the O’Donnell Heights Tenant Council. Interstate Realty Management, an affiliate of The Michaels Development Company, is an award-winning professional management company known for its extensive supportive services that will ensure the new development remains a long-term asset to the neighborhood.

Other members of the development team include Marks, Thomas Architects, Zavos Architecture + Design, and Morris and Ritchie Associates. A date for the official ceremonial groundbreaking for O’Donnell Townhomes1 will be announced soon.