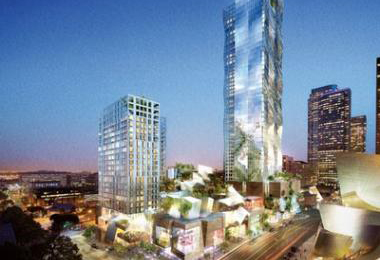 LOS ANGELES, CA - Related California started construction on a $120 million, 19-story apartment building at 225 N. Grand Avenue between 2nd and 3rd Streets, the first residential phase of its Grand Avenue Project. With 271 residences, including 20 percent affordable apartments, the building will bring the first apartments to Bunker Hill in downtown Los Angeles in more than a decade and add 500+ new residents. The project will create 417 construction jobs over the next two years.

Located next door to The Broad, the new contemporary art museum now under construction and set to open in 2014, the apartment tower will front on Grand Avenue in the heart of downtown’s cultural core. It is within walking distance of the Walt Disney Concert Hall, the Music Center, MOCA and the Colburn School’s Zipper Hall as well as Grand Park, the new park between Grand Avenue and City Hall financed by a $50 million contribution from Related. The building is across Hope Street from Metro’s planned Regional Connector station, the key connection point linking the Blue Line and Exposition Line with the Gold Line and Union Station. A public plaza between the apartments and The Broad will sit atop General Thaddeus Kosciuszko Way at Upper Grand Avenue and will serve as the key pedestrian connection from the Regional Connector to Grand Avenue.

“This is a welcome next step in the Grand Avenue Project, adding to earlier components of Grand Park and The Broad,” said Los Angeles County Supervisor Gloria Molina, chair of the Joint Powers Authority that oversees the Grand Avenue Project. “We are pleased that Related is beginning with an apartment building that will offer affordable living as well as market rate rentals to the area, further realizing our collective vision of Grand Avenue as a dynamic and diverse mixed-use environment.”

Mayor Antonio Villaraigosa, City Council Members Jan Perry and Jose Huizar, and Supervisor Molina joined Related California President and CEO Bill Witte at the official groundbreaking ceremony. The building is expected to be completed in the fourth quarter of 2014.

“The Grand Avenue Project is a game changer in the revitalization of downtown Los Angeles,” said Mayor Villaraigosa. “These new apartments are a significant step forward as we continue to make downtown a vibrant place to live, work and play.”

“Downtown continues to gather momentum as a residential, cultural, civic and entertainment hub for our city. We look forward to the other components of Grand Avenue as the economy strengthens,” said Councilman Huizar, vice chair of the Joint Powers Authority and City Council representative for the area.

Councilwoman Perry, previous vice chair of the Joint Powers Authority, noted, “The Broad and Related’s Grand Avenue apartment are the final pieces in completing a vibrant pedestrian environment on Grand Avenue’s west side. This will be a lively area with the museum, plaza, new restaurants and soon the Regional Connector — helping to fulfill the goal of activating this dynamic hub for culture, entertainment and living.”

The new Grand Avenue apartment building will be the first high rise in Los Angeles designed by Arquitectonica, a firm globally recognized for its innovative high rise designs. The building will be a pure rectangular white prism punctuated by windows of varying sizes and proportions, creating a dynamic display on its façade. The windows gradually change in scale, culminating in energy zones of full glass at the ground level on Grand Avenue and at the top of the building facing Hope Street and the freeway. It will be built to LEED Silver Certification standards.

The adjacent plaza is expected to be completed in concert with The Broad in early 2014.

“All of us at Related are pleased to get the first shovel in the ground on this project and are excited about the vibrant new mix of uses it, along with The Broad and public plaza, will bring to this block of Grand Avenue, furthering the overall vision for the Grand Avenue Project. We applaud the leadership, vision and commitment of the Joint Powers Authority, and appreciate the strong partnership we have forged over the years to bring the various project components to fruition,” stated Witte.