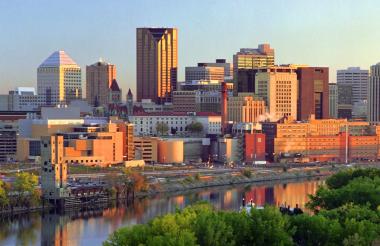 ST. PAUL, MN - The AFL-CIO Housing Investment Trust (HIT) today announced a commitment of $23.5 million constructing the West Side Flats Apartments, a $31 million development on the edge of downtown St. Paul. The project is expected to generate approximately 160 union construction jobs at a time when unemployment in the construction industry remains high.

"It's good to see the HIT is investing union pension dollars back into our community for needed housing while, at the same time, creating good jobs for our members," said Harry Melander , President of the St. Paul Building and Construction Trades Council.

West Side Flats Apartments is now the second HIT-financed development project underway in the St. Paul downtown area. Construction is also ongoing at the site of the $62.5 million Penfield mixed-use complex in the city's Fitzgerald Park neighborhood, which has $40.9 million in financing from the HIT.

"We are very pleased that HIT financing is serving as a catalyst for redevelopment in downtown St. Paul, helping bring quality housing, good jobs, and other needed services to the community," said Christopher Shaw , HIT Senior Investment Officer. "West Side Flats is our latest investment with mortgage banker Oak Grove Capital LLC here in St. Paul, which has worked with us for many years to finance housing projects in Minnesota."

The HIT has invested over $400 million in the St. Paul and Minneapolis metro area over the last 10 years, building or preserving over 4,200 units of housing in 32 projects and generating more than 3,800 jobs for members of the local building and construction trades unions.

The West Side Flats Apartments investment helped the HIT surpass its three-year goal of creating 15,000 union construction jobs across the country as its response to the national unemployment crisis. The HIT launched its job-creation effort, the Construction Jobs Initiative, in 2009. Since then, the HIT and its subsidiary, Building America, have helped finance 55 projects in 28 cities, leveraging more than $2.9 billion of development while generating over 15,000 union construction jobs. The HIT is not stopping at 15,000 jobs but has raised its goal to creating 20,000 jobs by the end of 2013.