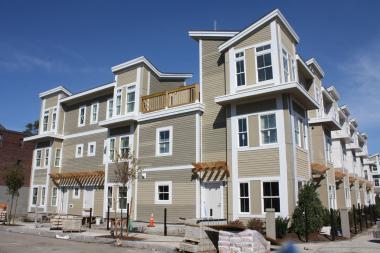 BOSTON, MA - The AFL-CIO Housing Investment Trust (HIT) is investing $33.5 million of union pension capital to construct 129 apartments for low-income households at Old Colony, one of Boston's largest and most distressed public housing properties. The project is expected to generate 340 union construction jobs.

The construction is part of a comprehensive redevelopment plan by the Boston Housing Authority and MassHousing in conjunction with the developer, Beacon Communities of Boston. This $61.4 million project is implementation of the second phase of their plan.

Previously, the HIT invested $26.7 million in Old Colony's $56.8 million first phase of redevelopment, which included 116 housing units and the 10,000-square-foot Joseph M. Tierney Learning Center that opened in the spring of 2012 and was also developed by Beacon Communities. The success of Old Colony's innovative master plan and environmentally sustainable design has been hailed as a national model for reviving older urban communities.

Construction of phase two will produce two low-rise apartment buildings and four clusters of townhomes. All of the housing will be affordable to households with incomes no higher than 60% of the area median income (AMI), with at least 13 units set aside for households earning 30% or less of AMI.

"The HIT's investment in the Old Colony redevelopment is part of our long-standing commitment to support the City of Boston in developing and preserving quality affordable housing for low-income families," said HIT Senior Vice President Tom O'Malley, who is Director of the HIT's New England Regional Office. He added that the union-built project "is already helping improve the quality of life for residents, who are enjoying the new environmentally friendly housing and attractive outdoor green space."

Situated on a 16-acre site in South Boston, the Old Colony complex has been a major affordable housing resource for community residents for 70 years. The project is replacing outdated and deteriorated buildings with new residential units in a variety of attractive housing styles that will integrate more smoothly into the surrounding neighborhood.

The rehabilitation work is being carried out in accordance with LEED criteria for sustainable development and includes the replacement of aged infrastructure with energy-efficient systems to reduce operating costs.

The new investment is part of the HIT's Construction Jobs Initiative, a national effort to get union construction workers back on the job through investments in housing projects. Since establishing this initiative in 2009, HIT investments of $1.2 billion, together with $59.6 million of New Markets Tax Credits from the HIT's subsidiary Building America CDE, have generated more than 15,000 union construction jobs across the country. Three thousand of these jobs are in Boston, where the HIT and its subsidiary have financed 10 projects representing $646 million of development and 1,202 housing units since 2009.