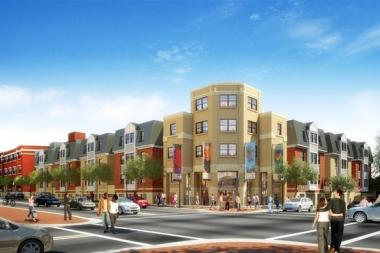 RICHMOND, VA - Hundreds of students have already visited the leasing center at 1200 W. Marshall, the newest student housing community at Virginia Commonwealth University (VCU), to snap up apartments for the 2013-2014 school year.

The leasing center opened in November at an off-site space located at 900 W. Broad Street while the 260,167 square-foot community is developed. In the leasing center, students can view the furniture that comes in each unit and can tour a mock apartment. To kick off the community’s pre-leasing program, the first 50 students to sign leases at 1200 W. Marshall will each receive an iPad Mini.

Developed by Gilbane Development Company, 1200 W. Marshall will house 406 students in a mixture of studio, two, three and four-bedroom apartments, along with one-bedroom and three-bedroom townhome options. The community is located in the heart of the VCU campus, directly across from the Siegel Center, and one of the buildings, the former Hajoca building, is being restored and utilized as part of the community.

VCU is widely known as the no. 1 ranked arts and design program of any public university, and 1200 W. Marshall celebrates that by featuring a large-scale art installment in its lobby. The lobby also boasts a gallery wall to allow VCU art students to display their creations.

“We felt it was important to really localize the project to fit into the community, and we did that by incorporating local art, which is a very strong element at the University,” said Bob Gilbane, president of Gilbane Development Company.

Students will enjoy a variety of amenities at 1200 W. Marshall, such as a yoga studio, fitness center, theatre, rooftop deck with fireplace, clubhouse and more. Apartments come fully furnished with modern furniture, a 40” flat screen TV and feature private bathrooms for each bedroom.

Gilbane Development Company also completed another student housing community at VCU in 2011, 8 ½ Canal Street, which added 540 beds to the rapidly growing campus and was 100 percent pre-leased before opening its doors for its inaugural year.