Via Verde Wins ULI Award for Workforce Housing Model of Excellence; One of Only Three in the Nation 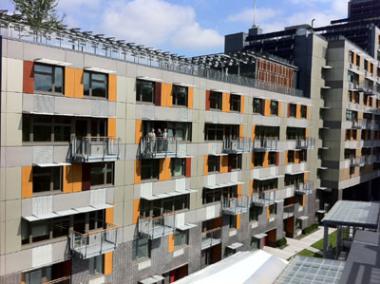 As general contractor, Lettire Construction shared in the award with Rose and Phipps; Dattner Architects and Grimshaw Architects, which designed Via Verde; and Ettinger Engineering Associates, Robert Silman Associates and Lee Weintraub Landscape Architecture. Via Verde qualified for the ULI award by winning the New Housing New York Legacy Competition, sponsored by the New York Chapter of the American Institute of Architects, NYC's Department of Housing Preservation and Development, the New York State Energy Research, and Development Authority and Enterprise Foundation.

The ULI national award, which is named after Jack Kemp, former U.S. Secretary of Housing and Urban Development (HUD) and former U.S. Representative, is an annual recognition of exemplary developments that meet workforce housing needs.

Via Verde, a state-of-the-art, healthy-lifestyle-focused development that received LEED NC Gold Certification, aims to pave the way for future affordable housing projects. It features details, finishes and amenities usually reserved for higher-end buildings. Lettire, which specializes in building affordable and supportive housing that is both green and sustainable, utilized eco-friendly best building practices, allowing Via Verde to promote healthy living for its tenants.

"From the time that Jonathan Rose Companies and Phipps Housing conceived of the idea of Via Verde, to the design and engineering, to the actual construction, Via Verde has been a model of what affordable housing can and should be like," said Nicholas Lettire, president of Harlem-based Lettire Construction. "Affordable and green have never really been mutually exclusive, and now, for some of us in the affordable and supportive housing industries, they are becoming increasingly synonymous. The development can only be as good as the team, and the ULI award is recognition of what can be accomplished when all the pieces are in place."

Via Verde, which opened in the summer of 2012 to critical and media acclaim, consists of 71 cooperative homes and 151 rentals. Residents enjoy improved indoor air quality as a result of Lettire's utilization of green cleaning materials and non-toxic, low-VOC materials during construction and, with an eye toward sustainability, Lettire installed photovoltaic solar panels to provide power to the common areas.

Building amenities include an attended lobby, bicycle storage, landscaped courtyard, playground area, amphitheater, and a series of green roofs. Some of the roofs include a Scots Pine tree orchard, edible-fruit-bearing apple and pear trees, and gardening beds where residents can grow organic vegetables. There is also a green roof and a fitness center on one floor.

Located at 700-706 Brook Avenue at 156th Street in the Melrose section of The Bronx and just a short walk from the 2 and 5 subway lines, Via Verde is just minutes away from "The Hub," the South Bronx's largest shopping district, and offers convenient access to schools, diverse restaurants, arts and recreational facilities.