Carter Announces Second Project at University of Louisiana at Lafayette After Completing 1,934 Beds 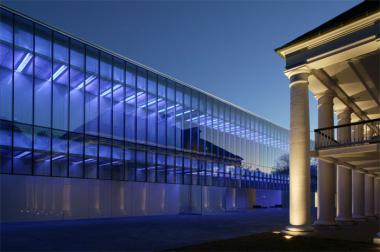 ATLANTA, GA - Carter, one of the nation’s leading investment, development and advisory firms, today announced it has been selected as program manager for a second project at the University of Louisiana at Lafayette. This project includes the on-campus program management for the university’s new 170,000-square-foot student union.

The announcement was made during the Carter Breakfast this morning, which took place at the Atlanta History Center. About 150 people gathered as Carter’s leaders provided updates on the future of the company; in addition, President Scott Taylor interviewed Mayor Kasim Reed, the featured guest speaker.

Following in the theme of the breakfast – "Bold New Future” – the news of this highly anticipated assignment comes on the heels of Carter’s successful completion of a $100 million, 1,934-bed student housing project at the University of Louisiana at Lafayette. The project also features a structured parking deck. Work for the student union is well underway, and completion is expected by the fall of 2014.

In September, Carter unveiled a new brand identity and announced it had closed on approximately $100 million in equity development deals aligned with the company’s streamlined focus. Since then, the company has strengthened its practice in key areas, including student housing, multifamily and mixed-use projects in core markets.

“This assignment really communicates the message of our bold, narrowed focus on investment, development and advisory services,” said Carter President Scott Taylor. “We have exciting higher-education projects currently scattered across the country, and we’re delighted to continue building upon such great momentum.”

Carter is one of the country’s leading real estate investment, development and advisory firms. The company, founded in 1958, has its headquarters in Atlanta and operations across the country. Carter has a proud history of leading visionary and bold real estate developments that have improved communities and created value for its clients.