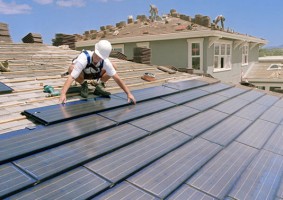 OAKLAND, CA - Habitat for Humanity, Pacific Gas and Electric Company (PG&E), and City of Oakland are celebrating the construction of a new 12-home affordable housing development in Oakland's District 7 and the renewal of PG&E's Solar Habitat program for a sixth year. This unique partnership provides solar power to Habitat homes built in Northern and Central California. Since its inception in 2007, the PG&E Solar Habitat program has assisted in the construction of 416 solar-powered Habitat homes. The announcement was made today at a Habitat for Humanity East Bay/Silicon Valley build site in Oakland.

"Today, the City of Oakland celebrates yet another partnership with Habitat for Humanity and PG&E. Together, we are transforming a site that has long been vacant in this community," said City of Oakland Council President Larry Reid. "We look forward to how the development of these 12 new Solar Habitat homes on Edes Avenue can change an entire neighborhood and are excited about several additional Habitat for Humanity developments in the area."

With this year's contribution of $1.27 million, PG&E will provide energy-saving solar panels for 64 Habitat homes across Northern and Central California. To date, PG&E has donated more than $6.4 million to help reach and respond to the housing needs of California families. The partnership is further supported by the thousands of PG&E volunteers that have come together at Habitat build sites across the state.

"Habitat for Humanity's mission of making homeownership a reality for deserving families in California and around the world is one PG&E is proud to support," said Chris Johns, Pacific Gas and Electric Company President. "Through our flagship Solar Habitat program, PG&E and Habitat for Humanity are bringing clean, renewable and affordable energy to homes and neighborhoods across PG&E's service area, particularly to those that historically have been underserved and overlooked. Together, we're building a brighter future for the people of this State."

The PG&E Solar Habitat program lowers the electricity bill of an average household by $500 per year. Each solar panel generates nearly 300 kilowatt-hours of clean, renewable energy from sunlight per month, avoiding the release of more than 132,000 pounds of carbon dioxide to the atmosphere over the 30-year life of the system. This year's donation prevents emissions equivalent to nearly 18,000 gallons of gasoline being consumed. When combined with total solar supplied since 2007, the program prevents greenhouse gas emissions equal to taking 2,001 cars off the road for a year.

"Habitat for Humanity is tremendously thankful for the support from the City of Oakland and PG&E," said Janice Jensen, President and CEO of Habitat East Bay/Silicon Valley. "The City of Oakland was instrumental to the success of this development and others in the area resulting in 128 Habitat homes within a one-mile radius. The collaboration with PG&E has allowed these homes to be both financially and environmentally sustainable."