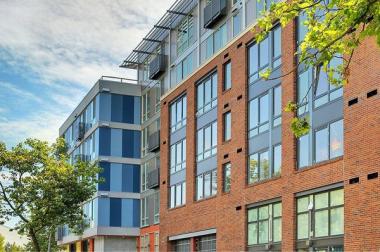 SEATTLE,  WA - EXPO, a luxury apartment building situated in Seattle 's Queen Anne neighborhood, recently installed its newest work of art on its property. The unique community, known for its eclectic style, commissioned Washington -based artist Austin Smith to design the piece after a national call to artists to propose and build a sculpture commemorating the 50th anniversary of the World's Fair.

Smith, formally trained in painting and sculpture, is a contemporary artist known for his public art pieces utilizing refined and organic materials in both commercial and residential spaces. His artwork including "Seven Exalted" and a boot sculpture has appeared throughout Washington state and the Ellensburg, Washington Hall of Fame respectively. The EXPO artwork, named "3 Crescents" and designed as a set of whimsical orchestrated sculptures, ties in with the nearby Seattle Center and Space Needle, and is a welcome addition to the local iconic architecture of the 1962 World's Fair.

"In celebrating the 50th anniversary of the Century 21 Exposition, we wanted the piece to somehow connect the old with the new," said Stacie Feinstein of Stacie Feinstein Fine Art Consulting, who oversaw the project. EXPO and 3 Crescents, conveniently located across the street from the Seattle Center, lends itself to the historical significance of Seattle 's architectural and artistic contributions. The Century 21 Exposition, credited with revitalizing Seattle 's economic and cultural life, left behind a fairground and a number of public buildings, some of which still stand today. This includes the Seattle Center, an arts and entertainment venue that is one of Seattle 's leading attractions. "We wanted Expo to have this landmark, iconic sculpture. It has a lot of personality and fits right into the surrounding culture."

"The EXPO is a living space that illustrates what's modern and progressive in Seattle , and we think that this new piece personifies that sentiment."

EXPO, a luxury apartment building situated in Seattle 's Queen Anne neighborhood, is located in the heart of Seattle . This new dog-friendly and smoke-free community features studios, one and two-bedrooms and townhomes furnished with gourmet kitchens, individual washers, dryers, and rooftop decks amongst an array of amenities including three rooftop lounges, a green roof, 24-hour health club-style fitness center, and concierge-style services. EXPO is a modern living space for people who know what's happening now while shaping what's happening next.