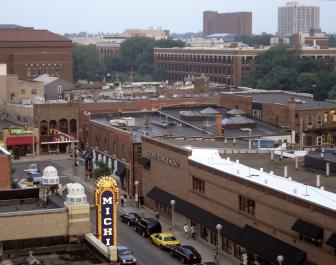 ANN ARBOR, MI - A new proposal to build a $50 million apartment building in downtown Ann Arbor will bring more student housing that will be better, safer and for which a need exists that also will encourage even greater walkability and density to the South University Downtown Area. The Gateway at 1320 S. University would be located next to the new LANDMARK (formerly 601 Forest) building near the corner of Washtenaw and South University. It will make available to residents and students who demand and deserve a vastly upgraded housing option that is also conveniently located close to campus, the City's major cultural attractions, employment centers and public transportation network.

Approximately 145 feet in height and with approximately 17,500 square feet on each floor, The Gateway would offer a beautiful living environment with a long list of building amenities for as many as 500 residents. Amenities in the proposal include an exercise studio, a lounge/community room, an entertainment center, 6,000+ square feet of retail space at ground level with an outdoor cafe. Covered parking, below, at, and above grade at the rear of the building is a highly coveted amenity also included in the proposal.

The Gateway was designed by longtime Ann Arbor resident and architect Brad Moore, whose firm, J Bradley Moore & Associates Architects, has designed and planned projects in the Ann Arbor area for more than a quarter of a century.

"We are very excited and pleased to be able to offer a building of this quality to Ann Arbor. The area is in transition and the time is right to bring newer, better, and safer student housing closer to the campus," said Mr. Phil Sotiroff, an owner of the site and an owner and manager of campus housing in Ann Arbor, Ypsilanti and East Lansing for more than thirty years. "We are going to demonstrate support for the project because it is the right thing to do for Ann Arbor, U of M students and the South University Downtown Area, which needs to be reinvigorated with more new development."

The 1320 S. University site currently contains Park Plaza Apartments, a small two-story student housing building. Originally contemplated as part of The LANDMARK concept, the site was eliminated from that development's plan during the financial crunch of 2008. At that time, the 1320 S. University site had the same zoning parameters as all of the other properties on South University which would have permitted a building to be 175 feet or more in height.

The Gateway proposal is scheduled to go before the Zoning Board of Appeals on October 24 to request variances that would permit a building permissible under D-1 regulations but with added restrictions. The restrictions address the City's position that 1320 S. University should be zoned D2 to protect from Downtown intensity the parcels that 1320 S. University border. The parcels include the mud bowl, two Greek houses and a house on Forest Court.

The Gateway would provide Ann Arbor with the greater density and walkability needed to meet the goals and vision for a more vibrant Downtown, and offer a striking new entrance to the South University Downtown Area. It would be another significant catalyst to help revitalize the area for the many nearby shops and restaurants. It could also generate an additional $1 million annually in tax revenue for Ann Arbor.

The proposed Gateway project has the support of the South University Area Association as well as many local businesses and residents.