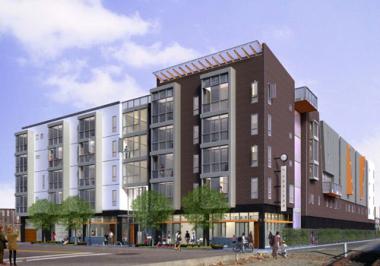 EMERYVILLE, CA - Archstone, a leader in apartment investment and operations, announced the start of construction on its second apartment community in the Bay Area in less than two months. The 175-unit apartment community, Archstone Parkside, will be located at the corner of Powell Street and Hollis Street, just blocks from the San Francisco Bay. The apartment community, which is being developed as part of a joint venture with Prudential Real Estate Investors, will offer easy access to numerous professional jobs, entertainment, dining and shopping opportunities. Archstone Parkside is only a few miles from the development site of Archstone Berkeley on Addison, which went under construction in mid-July.

“The San Francisco Bay Area is an incredible place to live, work and play,” said R. Scot Sellers, Archstone’s chief executive officer. “We are excited to begin the development of two new, high-end apartment communities that will help meet the constantly growing demand for rental housing in the Bay Area.”

Archstone Parkside will be within a short drive or Bay Area Rapid Transit (BART) ride from tens of thousands of professional jobs in the area’s largest employment centers. Among the large employers with campuses less than a mile from the site are Pixar Animation Studios, Novartis, Amyris Biotech, Bayer and Kaiser Oakland. In addition, residents will be within a mile of the MacArthur BART Station, which can be reached via the free Emery Go Round bus shuttle service, and a 15-minute drive over the San Francisco-Oakland Bay Bridge from San Francisco’s Financial district.

The Archstone Parkside neighborhood is also rich in entertainment, dining and shopping destinations, including the Bay Street retail and entertainment center. The center, which is within a half mile of the site, is home to Trader Joe’s, IKEA, Niketown, PF Chang’s and California Pizza Kitchen. Local favorites nearby include Berkeley Bowl, Rudy’s Can’t Fail Café, Doyle Street Café and Bakesale Betty. Within five miles of the site are the Oakland Museum of California, Berkeley Ironworks, the Berkeley Marina, Tiden Park and Eastshore State Park.

At the apartment community, residents will have access to a number of quality amenities, including expansive views of the San Francisco and Oakland skylines, private courtyards, a resort-style pool with spa, business center and a 24-hour fitness center with pool views and free weights. The Bay Area apartments will also feature 9-foot ceilings in flats, 15-foot ceilings in select live-work units, modern European-style cabinets and granite countertops.

“This apartment community will offer the quality-of-life-enhancing amenities and features and style that people have come to expect in the San Francisco Bay Area,” said Charles E. Mueller Jr., Archstone’s president and chief operating officer. “We’re looking forward to delivering a community that will be an excellent addition to an already vibrant neighborhood in one of the nation’s premier markets.”