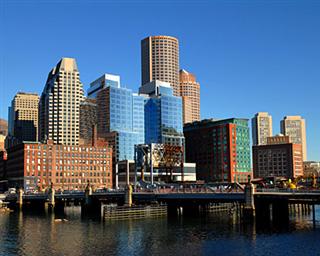 BOSTON, MA - The AFL-CIO Housing Investment Trust (HIT) announced that it is providing $90 million towards rehabilitating and preserving affordability at the Blackstone Apartments and Franklin Square House Apartments in Boston. Work on the two important affordable housing options for elderly and handicapped residents will generate approximately 150 union construction jobs.

The Blackstone Apartments in Boston's West End and Franklin Square House Apartments in the South End have served as rental properties for their respective communities for over 30 years. The HIT's investment in the two projects through the purchase of MassHousing bonds and notes will help refinance existing debt to keep the 338 housing units affordable for low-income residents for an additional 20 years. It also makes possible substantial rehabilitation work to improve their livability and accessibility, make them more energy efficient, and bring certain elements up to code. The two projects represent $148 million in total development costs.

"The HIT's investment in the Blackstone Apartments and Franklin Square House Apartments reflects our long-time commitment to working with MassHousing to finance quality affordable housing for low- and moderate-income families in Massachusetts," said Tom O'Malley, director of the HIT's New England regional office in Boston. O'Malley noted that since 2007, the HIT has provided $287 million in financing for over 2,600 units of affordable housing in Massachusetts.

All work on the Blackstone Apartments and Franklin Square House Apartments will be performed under collective bargaining agreements with local building and construction trades unions. CWC Builders Inc. is the general contractor.

"It's good to see union pension capital being invested in these projects that are going to create family-supporting jobs for our members while also preserving low-cost housing that our community needs," said Martin J. Walsh, Secretary-Treasurer and General Business Agent, Metropolitan District Building and Construction Trades Council.

Project developer POAH, LLC, is an affiliate of Preservation of Affordable Housing, Inc., a Boston-based nonprofit organization that acquires, preserves, and manages subsidized affordable housing developments around the country.

"When affordability is lost, families are displaced, lives are disrupted, and people no longer have economic security," said Rodger Brown, Managing Director of Real Estate Development for Preservation of Affordable Housing. "It is absolutely essential that we stabilize these properties and ensure that they remain affordable for low-income seniors and individuals with disabilities well into the future."

The scope of work for the two properties includes exterior and interior repairs and upgrades as well as improvements to reduce the buildings' environmental impact, including additional insulation, new windows, and more energy-efficient systems. These measures support the HIT's broader commitment to create green jobs by financing projects that conserve energy and reduce buildings' operating costs.

The Blackstone and Franklin Square House Apartments are the latest of seven Boston projects that the HIT has helped finance under its Construction Jobs Initiative, creating over 1,900 union construction jobs in the city and more than 13,500 jobs nationally to help keep union members working at a time of high unemployment in the construction industry. Through this jobs initiative, the HIT has invested $224 million in Boston over the last three years, leveraging $470 million of development activity in the city.

About the HITThe AFL-CIO Housing Investment Trust (HIT) is a fixed-income investment company registered with the Securities and Exchange Commission. It manages $4.4 billion in assets for more than 350 investors, which include union and public employee pension plans. The HIT invests primarily in government and agency insured and guaranteed multifamily mortgage-backed securities. The HIT is one of the earliest and most successful practitioners of socially responsible, economically targeted investing, with a 45-year track record that demonstrates the added value derived from union-friendly investments. The investment objective of the HIT is to provide competitive returns for its investors and to promote the collateral objectives of constructing affordable housing and generating employment for union members in the construction trades and related industries. Since its inception, the HIT has invested over $6.4 billion to finance more than 102,000 units of housing nationwide, generating over 70,000 union jobs.