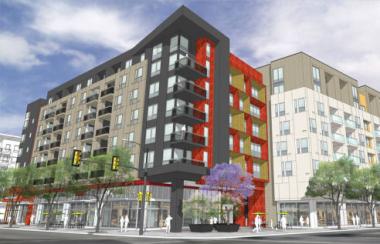 This enclave in downtown L.A. has undergone a renaissance of improved desirability over the last several years. It's a seasoned neighborhood that is multi-cultural with shopping, a night life and civic pride that is shown in the preservation of so many of its iconic features," said Bill Montgomery, president of SRG's Multifamily Acquisitions & Investment Division.

The development at South San Pedro and East 2nd streets will be three blocks from Los Angeles City Hall and four blocks from the downtown Bunker Hill financial district.

SRG purchased the property from The Related Companies. SRG plans a seven story, type III podium design that provides for greater contemporary styling in the exterior's architectural design while incorporating styling elements respecting the heritage of the community.

The apartment community will include townhomes, 17,000 square feet of retail space and three levels of underground parking. The project also incorporates a public parking garage of at least 100 spaces that will be developed and sold to a third-party operator.

Montgomery said construction is slated to begin next March on the development, which will be valued at $100 million. Rents will average about $2,200 a month, he said

Amenities at the new community will include a pool and spa, a two-level fitness facility, club, game and café lounges as well as a rooftop deck and living space.

SRG's financial partner in the development is the Pritzker Realty Group. The project is being designed by TCA, Inc.

SARES-REGIS Group of Irvine, Calif., is one of the leading developers and managers of commercial and residential real estate in the western United States. SARES-REGIS Group has a combined portfolio of property and fee-based assets under management valued at more than $4 billion, including 15 million square feet of commercial and industrial space and more than 13,000 rental apartments. Since its inception, the company has acquired or developed approximately 46 million square feet of commercial properties and 20,000 multifamily and residential housing units.