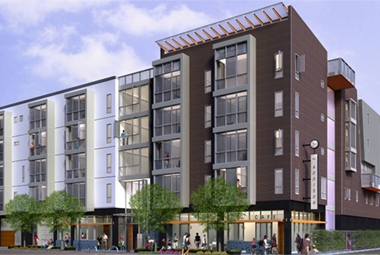 BERKELEY, CA - Archstone, a leader in apartment investment and operations, today announced the start of construction on its first apartment community in Berkeley, Calif. The 94-unit apartment community, Archstone Berkeley on Addison, will be located at the corner of Third and Addison, just blocks from the Berkeley Marina and the San Francisco Bay. The apartment community’s location offers easy access to a vast array of professional jobs, shopping destinations, dining options and public transportation.

“Berkeley is an incredible city and an excellent fit for an Archstone apartment community. It is a highly desirable place to live, has limited land on which to build new housing and has a strong, diversified economy,” said Amir Massih, Archstone’s group vice president of development for the San Francisco Bay Area. “We’re excited about starting this project and look forward to providing an outstanding addition to the neighborhood and for our future residents.”

Archstone Berkeley on Addison will add much needed quality apartment housing to the area, which is expected to experience significant employment growth in the near future. Two local construction projects are expected to add about 300,000 square feet of biotech office and laboratory space, while Pixar recently completed a 155,000-square-foot expansion of its Emeryville campus.

Berkeley is already home to several large, professional employers, including the University of California at Berkeley, Alta Bates Medical Center and Bayer Pharmaceuticals. In addition, the San Francisco Financial District and Oakland’s Central Business District are within 15 minutes of the development site. Residents will also be one block from Amtrak’s Berkeley Station and the University Avenue interchange of I-80, and about 1 mile from the Bay Area Rapid Transit’s North Berkeley Station.

Also within blocks from the development site are a number of upscale shopping and dining opportunities. The Fourth Street Shopping District, Berkeley’s premier outdoor shopping area, is two blocks from the site and home to the Apple Store, Sur La Table, Kiehl’s and Anthropologie. In North Berkeley, the Gourmet Ghetto area features a host of locally famous eateries, including Chez Panisse, Vintage Berkeley wine shop and Peet’s Coffee & Tea.

“This is the first Archstone development start in the Bay area since completing the second phase of Archstone San Bruno in 2007,” said Rick Lamprecht, Archstone’s executive vice president of development for the West Region. “We’re pleased to be back in the business of developing great apartment homes in a vibrant neighborhood in one of the nation’s premier markets.”

Archstone Berkeley on Addison will offer a variety of quality-of-life-enhancing amenities, such as a roof deck with views of the Golden Gate Bridge, a D’tails Pet Salon for washing and grooming pets, an open-air fitness center with modern equipment and second-floor private terraces facing an interior courtyard. Inside the Berkeley apartments, residents will enjoy luxury plank flooring throughout, stainless steel appliances, European-style cabinets, and gas ranges.