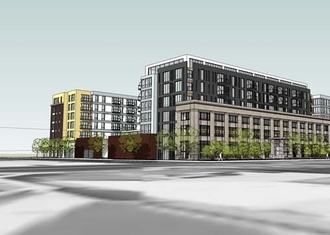 ST. PAUL, MN - The AFL-CIO Housing Investment Trust (HIT)announced a commitment of $41 million of union pension capital to help finance construction of the Penfield, a $62 million mixed-use development in downtown St. Paul. The six-story building will have 254 rental units, a Lunds grocery store on the first floor, and three levels of parking.

Construction work, which kicks off with a groundbreaking today, is expected to create more than 300 jobs for members of the St. Paul building and construction trades unions.

The City of St. Paul is sponsoring the Penfield as a key part of its downtown redevelopment program, bringing quality market rate housing and a full-service grocery store to the area while serving as a catalyst for future development.

"After years of planning, I'm very pleased that the Penfield project is moving forward," said St. Paul Mayor Chris Coleman. "We want to make Downtown St. Paul an even better place to live and work, and this project will continue to make that vision a reality."

With the construction industry still feeling the effects of the recent economic recession, the HIT-financed project will generate work for qualified contractors that have collective bargaining agreements with area construction unions.

"We really appreciate the fact that the HIT is using union pension capital to create good union jobs that will put many of our members back to work while giving our community an economic boost," said Harry Melander, President, St. Paul Building and Construction Trades Council.

In addition to the union workers building the Penfield, workers at the new Lunds grocery store will be represented by the United Food and Commercial Workers, Local 1189.

The Penfield is the HIT's 30th multifamily investment in the Twin Cities area in the last 10 years, and one of the largest. "We are proud to participate in this high-visibility project that will bring vital services, housing, and jobs to downtown St. Paul," said Stephanie Wiggins, HIT's Executive Vice President and Chief Investment Officer. "We see this development as a significant catalyst for further downtown growth and revitalization."

Spanning an entire city block, the Penfield site is situated near the downtown employment core, state government offices, and the Lowertown District with its numerous arts and entertainment venues. It is also located within a block of a new Central Corridor light rail line and directly south of a planned central park area. The project is seeking LEED Silver certification.

Dougherty Mortgage, LLC, is the mortgage banker for the project. "We've been working closely with the City of St. Paul as well as with HUD and the AFL-CIO Housing Investment Trust to put together the critical financing for the Penfield," said Tim Larkin, senior vice president. "It's exciting to be part of one of the largest residential development projects the city has seen in many years."

The HIT's investments in the Twin Cities metro area in the last 10 years have built or preserved nearly 4,000 units of housing and generated more than 3,500 jobs for members of the local building and construction trades unions.

The Penfield investment is part of the HIT's national Construction Jobs Initiative, through which the HIT has pledged to create 15,000 union construction jobs over a three-year period as its response to the AFL-CIO's call to action on high unemployment, especially in the building trades. To date, investments by the HIT and its subsidiary Building America CDE have leveraged more than $2 billion of development on 46 projects in 25 cities through this initiative, generating more than 13,500 union construction jobs.

The AFL-CIO Housing Investment Trust (HIT) is a fixed-income investment company registered with the Securities and Exchange Commission. It manages over $4.4 billion in assets for more than 350 investors, which include union and public employee pension plans. The HIT invests primarily in government and agency insured and guaranteed multifamily mortgage-backed securities. The HIT is one of the earliest and most successful practitioners of socially responsible, economically targeted investing, with a 45-year track record that demonstrates the added value derived from union-friendly investments. The investment objective of the HIT is to provide competitive returns for its investors and to promote the collateral objectives of constructing affordable housing and generating employment for union members in the construction trades and related industries. Since its inception, the HIT has invested over $6.4 billion to finance more than 102,000 units of housing nationwide, generating over 70,000 union jobs.