One Rincon Hill Phase II Kicks Off in SoMa District 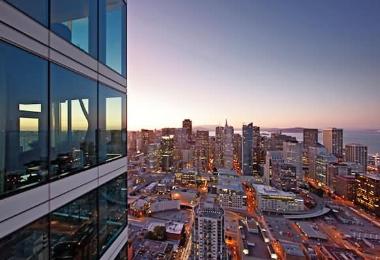 Construction will begin in July 2012, with occupancy planned for summer 2014 and ultimate completion in fall 2014. Phase II is expected to be the largest residential project currently under construction in San Francisco.

“The Phase II development of Rincon Hill is an attractive addition to our real estate investment portfolio,” said Rod Vogel, managing director at Principal Real Estate Investors. “The iconic development will bring much needed housing to the San Francisco residential market, while at the same time, adding another high-quality real estate property to the fantastic city skyline.”

“One Rincon Hill was always envisioned as a two-tower development,” said Mike Kriozere, development principal at Urban Pacific Investors. “We are thrilled to be breaking ground on the second half of what is still the tallest residential tower west of the Mississippi. With the continuing density of residents and commercial tenants, we are pleased to have such a well-situated property.”

One Rincon Hill has become one of San Francisco’s most recognizable landmarks and the tallest building on the skyline, in part due to its location atop Rincon Hill, the last buildable hill in the city. Topped with a glowing weather beacon at its crown, the 64-story Phase I tower, with 376 luxury condominium homes and 14 townhomes, was the most successful pre-sale in San Francisco’s history, with 90 percent reserved just two weeks after the sales center opened in 2006. Residents began moving in in February 2008, and it is now home to more than 650 people. About a dozen homes, all on upper floors, are currently available for sale, and the building is on pace for a sold out, fully occupied tower in fall 2012.

The 52-story Phase II tower, offering 299 units, will complete the development, which will eventually feature a total of 689 private residences and be home to more than 1000 people.

The addition of the 485,000-square-foot (Total Gross Building Area) Phase II tower is the fulfillment of a journey begun nearly eight years ago when Kriozere first identified the site on Rincon Hill as the location for this iconic development.

According to Kriozere, One Rincon Hill’s second tower will be a “52-story 450-foot version” of the existing tower with some subtle internal changes and new features:

Phase II will be offered as rental apartments, with condo mapping allowing for making units for sale at a future date. The core project team for Phase II remains as it was for Phase I, including architecture by Solomon Cordwell Buenz and structural engineering by Magnusson Klemencic Associates; however, the new general contractor is Webcor. A construction loan has been provided by Pacific Life Insurance Company.

As with the $24 million in fees paid for Phase I, the developer will pay a fee to the city in-lieu of including any Below Market Rate (BMR) units. In addition to the approximately $15.1 million BMR fee for Phase II, the city also will collect an estimated $4 million Rincon Hill Infrastructure Impact Fee, a $5.1 million SOMA Stabilization Fund Fee, and a School Fee of about $1 million.

One Rincon Hill is situated in the heart of one of San Francisco’s fastest-growing and most vibrant neighborhoods. One of the city’s oldest sections, the SoMa District experienced conversions of warehouses to lofts in the 1980’s, the opening of AT&T Park in 2000, and most recently, new condo developments with thousands of new residents. Today, SoMa is at the center of the latest technology boom, where trendy restaurants, bars, boutiques and the proximity of the waterfront make this a great location to live, work and play. One Rincon Hill is also just two blocks from the MUNI F line, and offers convenient access to major freeways connecting east to Oakland across the Bay Bridge, and south via Hwy. 101 and I-280 to San Francisco International Airport, the Peninsula, Silicon Valley and beyond.

The Principal Green Property Fund I, LP is a closed-end commingled fund sponsored and managed by Principal Real Estate Investors, LLC. The Fund is focused on multifamily, office, industrial, retail and hotel properties and is pursuing both ground-up development of commercial real estate, and the acquisition of value-add properties throughout the U.S. designed to achieve LEED certified status.