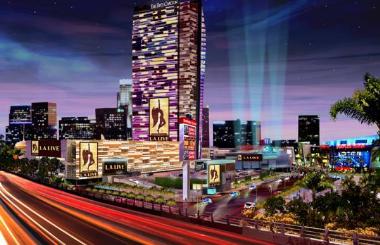 Wood Partners, the nation's leading builder of multifamily housing, expects to break ground on the 22-story, 290-unit project in the South Park district at 801 S. Hope St. in September, with leasing to start in the summer of 2014.

"Downtown LA is seeing significant investment activity," said Brian Hansen, Wood Partners' director of development for Southern California. "That's why our timing on Hope Street is perfect. Because we started in 2007 and now have full construction drawings, we'll be among the first projects out of the gate, and one of the first post-recession high-rises located in downtown."

The .7 acre yet-to-be named complex was purchased by Wood Partners back in 2008. The project will be modeled after Glass House Dallas, the developer's popular 375-unit luxury apartment community in Texas, and its 393-unit high-rise condo project, Glass House Denver.

The one-and two-bedroom units will consist of floor-to-ceiling glass, and will incorporate the most popular floor plans of Wood Partners' many existing high rise multifamily residential communities across the country.

The Hope Street high-rise will offer an impressive amenity package, and each unit will include an expansive balcony and high-end interior finishes.

Also included is an approximate 10,000 square foot elevated pool deck with thoughtfully designed clubroom with retractable glass walls that lead out to the oversized pool, outdoor social/dining area, spa, fire pit and garden retreat. Additionally, a roof top deck overlooking the Staples Center and LA Live to the southwest and the high rise buildings of the Central Business District to the north will provide additional outdoor gathering/event option for residents.

"We're designing this high rise to provide an outdoor experience in an incredibly urban environment," said Hansen. "Our demographic for this area -- young professionals -- has shown a clear desire for that indoor-outdoor connection."

Parking will be on six levels, two of them underground, with 5,000 square feet of retail space on the street level.

In addition to the 290 units planned at 8th and Hope streets, Wood Partners has 800 units under construction in Southern California, including 298 units at the $75 million Warner Park luxury apartment community 25 miles northwest of Los Angeles, set to begin leasing early next year.

Hansen sees opportunity for additional development. Two of the largest and fastest-growing areas of Southern California are downtown Los Angeles and Hollywood, he said. In 2010, Wood Partners completed a 218 unit project in Hollywood that had many of the same urban, transit oriented characteristics of this project at 8th and Hope.

"We're excited because we see a lot of positive things happening downtown," said Hansen. "The South Park district is becoming a popular spot to live, in part because it's extremely walkable -- you're close to L.A. Live, The Staples Center, movie theaters, retail and restaurants, as well as jobs and the LA Metro Red Line. It's a true transit location."

Housing demand by workers in their 20s to upper 40s will continue to grow downtown, according to Wood Partners' market research. The area boasts 500,000 jobs but only 30,000 to 35,000 housing units.

Because of its close proximity to jobs, businesses and mass transit, the property on Hope Street has a Walk Score of 97 out of 100.

A recent Brookings Institution study predicts a bright future for highly accessible and walkable neighborhoods in urban locations such as South Park.

"Our research shows that real estate values increase as neighborhoods became more walkable, where every day needs, including working, can be met by walking, transit or biking," Christopher B. Leinberger, co-author of the study, wrote in the May 25 New York Times.

The construction of the Hope Street high-rise project is estimated to generate nearly $23 million in local income, $2.4 million in taxes and other revenue for local governments, and some 350 local jobs.

The annual recurring impacts of building 290 rental apartments in a typical metro area typically are $6.7 million in local income, $1.1 million in taxes and other revenue for local governments, and more than 90 local jobs, based on data supplied by the National Association of Home Builders.

Wood Partners is a national real estate company that acquires, develops, constructs and property manages high density and mixed-use communities. In 2011, it was ranked the nation's No. 1 multifamily developer with 3,750 unit starts. Through quality construction, responsible land development and intelligent design, our communities reflect the aesthetic and social fabric of the community and provide a luxurious living experience at a fair price. The company has been involved in the development of more than 40,000 homes with a combined value of more than $5.5 billion nationwide. Wood Partners has offices in 15 major markets nationwide including Atlanta, Baltimore, Delray Beach, Boston, Charlotte, Dallas, Denver, Houston, Newport Beach, Orlando, Phoenix, Raleigh-Durham, San Francisco, Seattle, Washington, D.C.