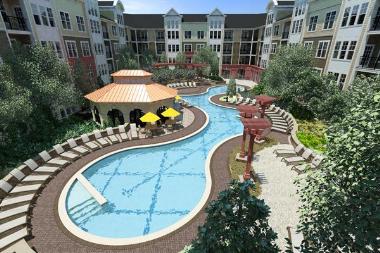 GAITHERSBURG, MD - Archstone, a leader in apartment investment and operations, announced the grand opening of Archstone Gaithersburg Station. The event was held at the community, which is located just south of the intersection of North Summit and East Diamond Ave. in Gaithersburg’s historic City center.

Mayor Sidney Katz kicked off the event with an official ribbon cutting ceremony in front of the leasing office. Archstone’s Vice President of Development Jeffrey Harris joined Mayor Katz in delivering remarks about the community and the City of Gaithersburg’s Smart Growth Initiative.

“We are excited to be a part of Gaithersburg’s award-winning smart growth initiative for Olde Towne Gaithersburg,” said Dean Wilson, Archstone’s senior vice president of development for the Washington, D.C. metropolitan area. “Not only is Archstone Gaithersburg Station in the heart of the biotechnology center of the United States, but it’s also in a transit-friendly hub that offers easy access to tens of thousands of jobs in downtown Washington, D.C. through the MARC Rail Station.”

The 389-unit Gaithersburg apartment community provides much needed housing to the area known as the epicenter of the nation’s biotechnology research industry. The community is directly across the street from the Gaithersburg MARC Rail Station, a commuter rail stop that provides residents with direct access to downtown Washington, D.C.

Archstone Gaithersburg Station is part of the City of Gaithersburg’s plan to redevelop Olde Towne into a lively, pedestrian-friendly community that generates economic growth while maintaining its historic charm.

“With the addition of Archstone Gaithersburg Station, new shopping and dining opportunities and easy access to the MARC Rail Station, the Olde Towne area is quickly becoming an attractive place to live for young working professionals,” said Neil Brown, Archstone’s chief development officer. “In addition, the area offers a growing technology employment base and exciting growth projects like the new Science City project. We believe that Archstone Gaithersburg Station will create long-term value for the City of Gaithersburg and for our residents.”