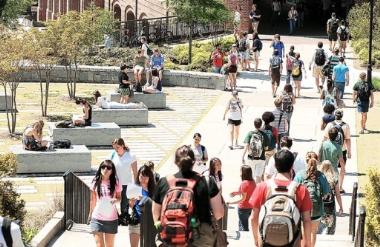 The specific awards were:

Again this year, EdR won more awards than any other company and bested our record by one over our total from last year’s inaugural competition.

EdR received the INNOVATOR Award for Most Creative On-Campus Public/Private Financing for the second year in a row. When EdR began Phase I of the CSU-Pueblo project in the spring of 2008, tax-exempt bonds were relevant and feasible. That soon changed. The market downturn worsened in the midst of design, threatening to stall or stop the development. But EdR and the university reacted quickly and smartly to keep the project moving.

As a result of EdR and CSU-Pueblo’s nimble response to the economic change, Phase 1 (Crestone Hall) and Phase 2 (Culebra and Greenhorn Halls) were completed early and under budget. The mission was accomplished while maintaining affordable rental rates for the students.

EdR was extremely proud to win the INNOVATOR Award for Best Renovation of an Existing Off-Campus Project for Granville Towers at the UNC.

Built by EdR in 1964, Granville Towers was stuck in time, with stark walls, linoleum floors and rooms that hadn’t changed since it our residents’ parents lived there. Because it is a treasured landmark at UNC, EdR and the owner, Chapel Hill Real Estate Holding, Inc., began a $1.5 million renovation instead of demolishing the structure and building anew. After the renovation was completed in 2011, Granville Towers reached 100% occupancy for the first time in the past five years and net operating income increased 86.5% over 2009.

The Best Vendor/Operator Solution Off-Campus winner was for mobile cell and WiFi upgrades at EdR’s community just off the grounds of the University of Virginia — GrandMarc at The Corner.

Because major carriers had not provided the proper support and infrastructure throughout the city of Charlottesville, Va., our residents were unable to pick up a single bar of coverage. EdR installed a Distributive Antenna System at the property that receives a cell signal from a donor tower and amplifies it throughout the community via radio transmitters.

Our community is now one of the a few — if not the only property — in the market that has “five bars” for the major carriers (AT&T, Sprint, T-Mobile and Verizon). This system has relieved the safety concerns of our managers, residents and their families while also giving the community a valuable selling benefit over its competitors in the Charlottesville market.

The Best Vendor/Operator Solution On-Campus winner was from the University of Louisville where EdR manages four large residence halls. In order to make sure residents and the university were satisfied with the accommodations and management team, EdR and the UL’s Department of Housing and Residence Life created a robust set of surveys with J Turner Research. The complete but easy-to-understand survey system was designed to assess: prospective residents’ leasing experiences; move-in experience and satisfaction; parent (guarantor) experience and satisfaction; overall resident satisfaction levels, including future housing plans; and management-client satisfaction.

The annual INNOVATOR Awards are sponsored and executed by Student Housing Business (SHB) magazine to honor excellence in development, architecture/design, sustainable design and development, finance, marketing and promotion and amenities in student housing properties, on- and off-campus. This year’s awards at SHB Interface Conference were the second annual presentation.

“We are proud to again be recognized as leaders in our industry as the number and categories of these prestigious awards signify,” said Randy Churchey, president and chief executive officer of EdR. “The EdR team works diligently and creatively every day to exceed our residents’ and clients’ desires.”

EdR (NYSE:EDR) is one of America's largest owners, developers and managers of collegiate housing. A self-administered and self-managed real estate investment trust, EdR owns or manages 62 communities in 23 states with more than 34,600 beds within more than 11,200 units.