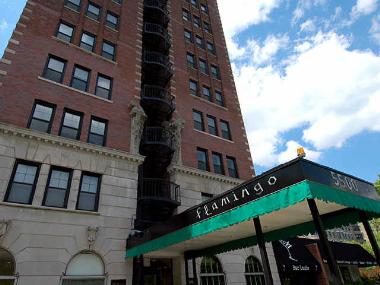 CHICAGO, IL - Headquartered in downtown Chicago, TLC Management exclusively owns and operates thirty-four apartment buildings, located on or near Chicago’s lakefront. At the close of 2011, TLC Management also closed on two new apartment buildings in Hyde Park: The Flamingo Apartments and The Versailles Apartments. Previously owned and operated by Irmco Properties and Management Corporation, TLC was more than willing to add these wonderful apartment communities to their already flourishing presence in Chicago’s Hyde Park neighborhood.

The Flamingo Apartments in Hyde Park, which is located at 5500 South Shore Drive, is both historically and architecturally stunning. Offering both studio and one bedroom apartments with rents starting as low as $671 per month, a few of this 18 story building’s apartment amenities include walk in closets, a fitness centre, a business center, a 24-hour laundry center, and a large outdoor pool. The Flamingo’s convenient location, just steps from Lake Michigan and minutes from downtown Chicago, not to mention its breathtaking views of the lake, make it the perfect addition to TLC’s many thriving apartment communities.

The Versailles Apartments in Hyde Park is positioned in the heart of the Hyde Park neighborhood at 5245 S. Dorchester Ave. Offering studio and one-bedroom living, this 96 unit building features a University of Chicago Bus stop right outside the front door. Other special features of the building include a fitness centre, a business center, convenient bicycle storage, and a rooftop sun deck.

The TLC philosophy offers much more than just an apartment. TLC Management expects and demands the highest standards of performance and integrity from all of their employees. Under the TLC philosophy, you can always expect top service and care. “The Flamingo and Versailles Apartments are both marvelous buildings, that we are thrilled to have been in the position to add to our portfolio of fine properties,” said Stuart Handler, CEO of TLC Management. “We look forward to transitioning these two new additions to TLC’s model of service and care,” Added Handler.

Since their inception in 1997, TLC has provided Chicago residents with the best in lakefront living. TLC Management is a Chicago-based company that exclusively owns and operates thirty-four rental apartment buildings on or near Chicago’s lakefront from Evanston on the North to Hyde Park/South Shore on the South.