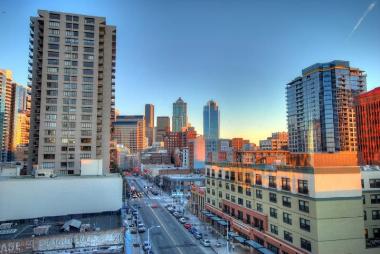 SEATTLE, WA - MG Properties Group (MGPG), a private, San Diego-based real estate investor and operator, announced the acquisition of The Cornelius Apartments, a 137-unit multi-family property in downtown Seattle, for $18.5 million.  The seller was an affiliate of Goodman Real Estate.

The Cornelius is located in the heart of the popular Belltown mixed-use residential neighborhood on the edge of Seattle's free bus service and blocks from Amazon.com's recently announced three-block, 3,000,000-square-foot planned Denny Triangle headquarters and office project development. Built in 1925, The Cornelius went through extensive physical improvements in 2010, including a full renovation of apartment interiors, addition of state-of-the-art common areas, and extensive upgrades to the building's systems and envelope.

Mark Gleiberman, MGPG's President, describes the property as being "ideally positioned to appeal to residents looking for a well-appointed in-city home with an excellent value proposition. Seattle's growing prospects for professional employment in the downtown and south Lake Union districts make Belltown likely to experience strong apartment fundamentals in the coming years."

The Cornelius is MGPG's second purchase from an affiliate of Goodman Real Estate within the past year. The seller was represented by Tim Campbell and Jeff Gilson of Pinnacle and MGPG represented itself in the transaction. The acquisition was financed with a $13.8-million, 10-year, fixed-rate loan from Freddie Mac, arranged by Bryan Frazier of CW Capital. MGPG took advantage of low rates to lock in 10-year financing with five years of interest only.

According to Paul Kaseburg, MGPG's Director of Investments, "The acquisition of The Cornelius was made more complex due to the recent renovation and leasing-up status of the property. As a repeat buyer, MGPG was well positioned to creatively work through these transactional challenges with the seller."

MGPG's most recent purchase in Seattle was the $22.3-million acquisition of The Park at Northgate apartment community in September 2011.

Since December 2010, MGPG has completed eight apartment acquisitions totaling 1,785 units at a value of more than $230 million. MGPG anticipates closing an additional $200 million in acquisitions within the next 12 months.