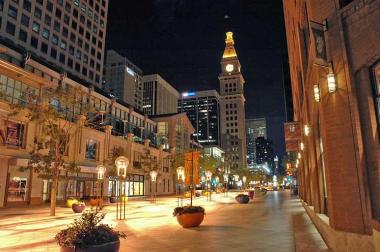 DENVER, CO - Perry Mason never lost a case in Denver and a piece of the filmed legacy of the famed fictional defense attorney will be preserved at Alta Alameda Station, a new apartment community to be built by Wood Partners, L.L.C., a national multifamily developer with two other luxury apartment communities in the Denver Metro Area.

Alta Alameda Station, a 338-unit community to be built on more than five acres at 275 Cherokee St., is located in the historic Baker district west of S. Broadway. It is directly across the street from the Alameda Light Rail station, which provides rapid access north to downtown Denver and south to the Denver Tech Center.

Construction will begin in early May on the property's three buildings, each four stories tall. Alta Alameda Station will be open for lease in the summer of 2013 and is expected to be complete in early 2014.

Alta Alameda Station will be constructed at the former site of the Denver Studio Complex, owned and operated since 1988 by Lighting Services Inc., which is relocating a few blocks away. It was used in the production of most of the 22 Perry Mason movies-of-the-week filmed in Denver until the death of series star Raymond Burr in 1993.

The witness box where Perry Mason routinely prodded confessions out of recalcitrant rogues has been preserved and, along with other artifacts and photos of Colorado's film history, will be part of the design of Alta Alameda Station.

Wood Partners developed Alta Aspen Grove in Littleton, as well as the forthcoming Alta City House project currently being constructed adjacent to Union Station. The company has a policy of green building at all new developments, and Alta Aspen Grove was the first market-rate apartment community of stick frame construction to be certified under Leadership in Energy and Environmental Design (LEED) for Homes in Colorado.

Alta Alameda Station also will be an environmentally sound community featuring a sustainable green design and an outdoor orientation.

"This community will be designed and built to attract residents who want the 'Baker lifestyle' -- pedestrian-friendly urban living with a creative, diverse population and unique living spaces," McEntee said. "There will be a courtyard and rooftop terrace to take advantage of Denver's 300 days a year of sunshine, along with a dog park and a bicycle workshop."

Alta Alameda Station will offer a range of studio, one-, two- and three-bedroom units, each with a patio or deck and vinyl plank flooring in entryways, kitchens and bathrooms.

The complex includes a set-aside route for a bicycle-pedestrian path that will connect to the Alameda Light Rail station as well as the Platte River Greenway and a planned lifestyle mall south of the station.

Steve O'Dell and Chris Cowan of Apartment Realty Advisors were the brokers on the transaction. The project's design team comprises Paul Bergner of PBA, John Norris of Norris Design and Billy Harris of Harris Kocher Smith.

About Wood Partners Wood Partners is a national real estate company that acquires, develops, constructs and property manages high density and mixed-use communities. In 2011, it was ranked the nation's No. 1 multifamily developer with 3,750 unit starts. Through quality construction, responsible land development and intelligent design, our communities reflect the aesthetic and social fabric of the community and provide a luxurious living experience at a fair price. The company has been involved in the development of more than 40,000 homes with a combined value of more than $5.5 billion nationwide. Wood Partners has offices in 15 major markets nationwide including Atlanta, Baltimore, Boca Raton, Boston, Charlotte, Dallas, Denver, Houston, Newport Beach, Orlando, Phoenix, Raleigh-Durham, San Francisco, Seattle, Washington, D.C.