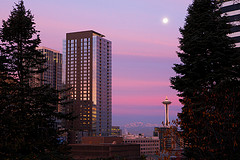 SEATTLE, WA - Officials at Aspira announced today that the 37-story vertical community is now fully leased, making it one of the highest-valued Class A core assets in downtown Seattle. Located in the dynamic South Lake Union neighborhood and a short walk from shopping, public transit and other urban amenities, Aspira has successfully leased 100% of its retail and nearly all of its 325 apartment homes.

"The stabilization of this stunning mixed-use building supports what we've believed all along --- that Aspira has an unmatched location and a unique urban high-rise lifestyle that proves to be very appealing in today's competitive marketplace," said Ron Merritt, principal and COO of Keller CMS, one of Aspira's developers. "We couldn't be more pleased with Aspira's lease-up, and how this new community is contributing to an already-thriving area of downtown Seattle."

"Aspira is a core building in a core location that stands out for all of the right reasons. It's an environmentally friendly building with breathtaking views offering distinctive architecture amongst the Seattle skyline. Its quality and features are in high demand by Seattle's sophisticated urban dwellers," said Mark Tutun, partner of O'Connor Capital Partners, an Aspira development partner.

Aspira is located at the corner of Stewart St. and Terry Ave., in close proximity to shopping and restaurants and major employers such as Amazon.com, Microsoft, Group Health, and University of Washington Medicine, to name just a few. Aspira is situated on one of Seattle's "Green Streets," a city program that allows for wider-than-normal sidewalks, narrowed roadways, enhanced landscape treatments and an overall improved pedestrian experience. Aspira is the first project in downtown Seattle to receive the 4-Star Built Green rating for high rise buildings, making it one of Seattle's most sustainable residential communities. In addition, last year Aspira received the New Development of the Year from the Washington Multi-Family Housing Association, the top award given to developments opened in 2007 or later.

Aspira was designed to give residents a contemporary, sustainable urban experience with its clean lines, high ceilings, wall-to-wall windows and sweeping views of Seattle's skyline and the surrounding Cascade and Olympic Mountain ranges. The building has operable windows and central air conditioning throughout the property and over 40% of the residences are corner units with decks or outdoor terraces. Aspira's 17,000-square-foot, resident-only 11th floor, named the "E Level," features a fully-equipped fitness area and adjoining yoga studio, a state-of-the-art media room and a large, furnished community room, connected to an outdoor terrace. The tower also has an array of sustainable features and is the first building of its kind in Seattle to provide electric car recharging stations in its resident-only parking garage.

Aspira's second retailer, Sola Salon Studios, opened earlier this month, bringing a unique service offering to downtown Seattle.  Sola combines the roles of the self-employed salon professional and salon owner, and developed it into a concept that allows professionals more independence, privacy, and control over their own space.

Aspira was designed by renowned Seattle-based LMN Architects, and the tower was built by Turner Construction.