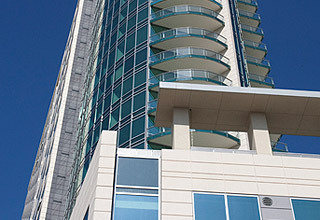 BEVERLY HILLS, CA - International real estate investment and services firm Kennedy Wilson announced that the company sold two of its multifamily properties for a total of $154 million. Net proceeds of $64 million will be distributed to the company and equity holders, including $18.5 million to Kennedy Wilson. 360 Residences, a 213-unit luxury residential tower in San Jose, CA and Arbor Creek Apartment Homes, a 440-unit community in Beaverton, OR were traded to separate buyers at an average cap rate of 4.5%.

Kennedy Wilson acquired the first trust deed on 360 Residences in November 2010. When the company took title to the property in March 2011, it was vacant with unfinished interiors. The company converted the use to apartments, completed $2 million of interior finishes and then leased up and stabilized the property, which is now at 97% occupancy.

“The goal was to complete and then stabilize the asset, and we took 360 from a note to an income producing apartment building in ten months,” said Robert Hart, president of KW Multifamily Management Group.

Over the past few years, Kennedy Wilson increased the rental income of Arbor Creek, improving NOI by 22% since 2010. Recent upgrades to the property include renovation of the leasing center, clubhouse and fitness center in addition to paint and other exterior enhancements.

Kennedy Wilson’s multifamily portfolio in the U.S. and Japan now consists of ownership interests in 13,305 units, including deals currently under contract.